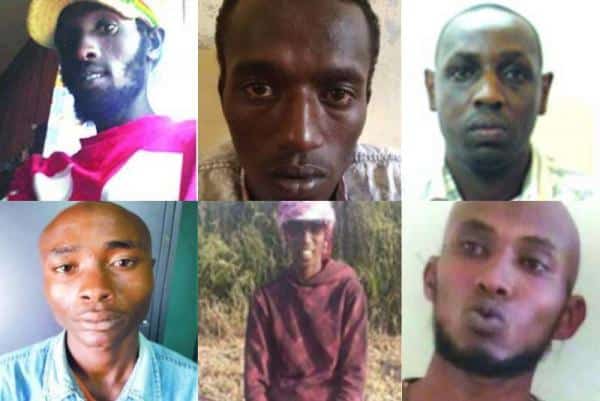 Police have appealed to the public to help them arrest six men believed to be part of a network that participated in the last Tuesday’s dusitD2 terror attack.Police made public photos of Didu Mohamed Fugicha alias Dingdong alias Duktur, Hussein Adan Hussein alias Etto, Gaddafi aka Munene, Abdi Ali Kanchora, Boru Abdi Bidu and Ramadhan Wario Bonaya alias Rasho.The wanted men are believed to be members of a cell that originated in Isiolo and travelled to Somalia to join Al Shabaab between May and June 2017, before returning to Kenya with the sole intent of harming citizens.

Two other wanted men are yet to be identified.Last Tuesday’s attack has now forced security agencies to focus on Isiolo County, which has emerged as a preferred place for radicalism and facilitation of Shabaab activities.Ali Salim Gachunge, alias Farouk, who was involved in the dusitD2 attack, was born and brought up at Kula Mawe estate in Isiolo town.Early last year, Al-Shabaab used Isiolo as a safe haven to plan one of the biggest terror attacks, but which was thwarted. This emerged after security officers intercepted a vehicle laden with explosives in Merti. It was headed to Nairobi.Three occupants engaged the police in a fierce firefight, leading to the death of Mbarak Abdi Huka and the arrest of Abdulmajid Hassan Adan and Osman Nane, whose court cases are ongoing.

A search of the vehicle led to the recovery of 36 unprimed hand grenades, military knives, five AK-47 rifles with 36 fully loaded magazines and an Al-Shabaab flag.During the planning stages of the foiled attack, a Shabaab commander only known as Dheere sent four pictures of the intended attackers.Police said the photos were meant to facilitate fraudulent acquisition of Kenyan national identity cards for the attackers.They were intercepted by security agencies through collaboration.

Death Announcement: The passing away of Erick Ndaka’s brother

After been heckled at Raila Rally,Kidero gets some love at Nyayo Stadium