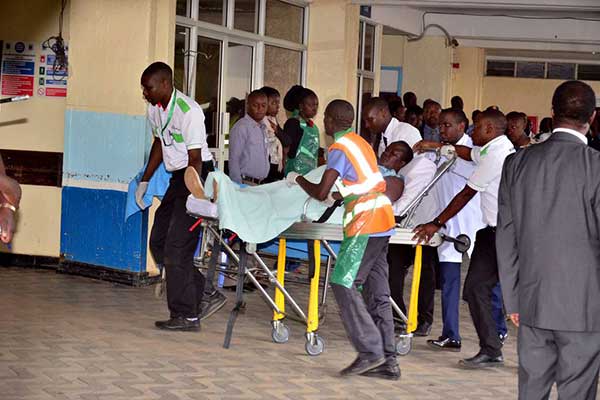 At least six people have died and 30 others have been rushed to various hospitals in Nairobi with injuries following a suspected terrorist attack at an upscale hotel in Nairobi’s Westlands.

Five people died at the Secret Garden restaurant in the Dusit complex after a suspected suicide bomber blew himself, according to the Inspector-General of Police Joseph Boinnet.

Another woman succumbed to her injuries at the MP Shah Hospital which had received six casualties following the Tuesday afternoon attack.

Four survivors were taken to the Aga Khan University Hospital.

One person with gunshot wounds was operated on and was said to be out of danger.

The other two were admitted with soft tissue injuries and were in stable condition.

Avenue Hospital in Parklands admitted 16 survivors, with one woman being in critical condition after being shot four times in the abdomen and was being operated on.

One person sustained a gunshot wound to the thigh, with another fracturing a leg during the ensuing stampede.

Kajiado North MP Joseph Manje who visited the hospital, said he had seen the patients and they were in stable condition.

Mr Manje appealed to Kenyans to donate blood to help the victims.

He said he would also donate blood as part of the emergency management effort.

“I am also going to donate blood as soon as the emergency tent is set up for the procedure,” said Mr Manje.

Police officers blocked journalists from accessing the hospital saying they had instructions from Inspector-General Joseph Boinnet.

“We have been instructed by Inspector-General Joseph Boinnet himself not to allow journalists in the wards or the accident and emergency unit,” said a police inspector only identified as Charles.

One suspect has been arrested following the Tuesday afternoon attack in Riverside, Nairobi as rescue operations continue.

Specialist police units have been at the scene as they seek to apprehend other attackers at the DusitD2 Hotel.

At the same time, more heavily armed security officers aboard two UN vehicles have made way into the building.

Security teams could also be seen patrolling the fourth floor of the building housing the Commission on Revenue Allocation (CRA) offices.

Mr Francis Njue, who was caught up in the melee, narrated how in most of the rooms, shaken customers and visitors had locked themselves in and would not open even after police officers who were first to arrive identified themselves.

Those being rescued had to undergo thorough frisking by the security agencies.

What was happening Today at Amani Ridge the Place of Peace