Is Matiangi the new prime Minister? Uhuru appoints him head of gov’t projects 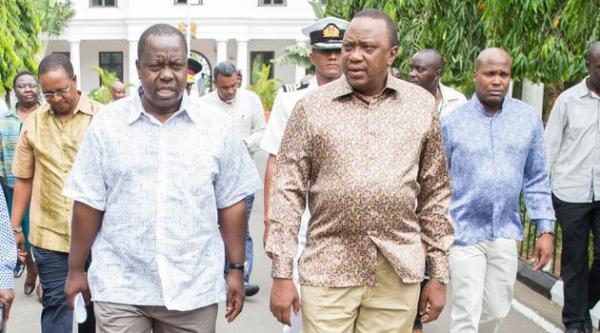 The committee with National Treasury Cabinet Secretary Henry Rotich as the Vice-Chairperson will work alongside a technical team chaired by Interior Principal Secretary Karanja Kibicho and deputized by his National Treasury counterpart Kamau Thugge.

President Kenyatta said during meeting regional and county commissioners on Tuesday, the security chiefs will chair weekly meetings to monitor the implementation of government projects.

“You will in due course of this week be provided with clear guidelines on standards, procedures and reporting requirements,” Kenyatta told newly deployed security chiefs at State House, Mombasa on Tuesday.

Matiangi’s new role as the Chairperson, National Development Implementation and Communication Committee effectively makes him the leader of the much touted “one government approach policy” through which the Ministry of Interior and Coordination of Government has been working with other ministries in the implementation of key government programs.

Some of the programs carried out under the multi-agency framework include the supervision of national examinations where the interior ministry has jointly worked with the ministries of education and ICT to eliminate irregularities.

Matiangi who sits in the National Security Council alongside Foreign Affairs Cabinet Secretary Monica Juma and Defence’s Raychelle Omamo attributed the successful operation that saw four al-Shabab militants neutralized at the end of a 20-hour security operation to the seamless working relationship of a multi-agency security response team under the direction of General Service Unit Commandant Douglas Kanja.

In his address to Regional and County Commissioners on Tuesday, President Kenyatta said all ministries and agencies will be required to work in concert to deliver on the government’s agenda.

“I’ll require all departments as well as semi-autonomous agencies to embrace the same multi-agency approach under the National Security Council which is being pioneered with significant success,” he outlined.

The naming of Matiangi as Chairperson of the National Development Implementation and Communication Committee elevates him to a de facto Prime Minister, a position that although non-existent in the constitution, he is seen to have executed since being named substantive interior CS in January last year.

Matiangi who is among longest serving members of Kenyatta’s cabinet became the acting interior Cabinet Secretary in July 2017 following the death of his predecessor Joseph Nkaiserry.

His tenure as Education CS since Kenyatta assumed office in 2013 was characterized by radical reforms that won him praise and criticism in equal measure.

Monday’s Executive Order which President Kenyatta’s Press Office did not report on comes in awake of repeated proclamations by the Head of State on the need for a more inclusive government.

In most recent remarks on Sunday, Kenyatta hinted at re-engineering the constitution through a popular initiative to create a more inclusive government while attending a burial in Kisumu in the company of Opposition leader Raila Odinga.

“Our politics must not be on the basis that some people win and others lose. We have to look at a way of in which we can remodel our politics so that we never have some Kenyans feel excluded when others are in government,” he said.

The Head of State made similar remarks on December 13, 2018, when he visited the lakeside city of Kisumu that voted overwhelmingly for Odinga in the 2017 presidential election, when he launched the rollout of the Universal Health Care (UHC) initiative.

“This politics where we are competing for others to join the government as we lock others out must come to an end. We want competition that will ensure that every community in Kenya feels as part of government,” Kenyatta, who was then accompanied by Deputy President William Ruto and his host Odinga, told a crowd that had gathered to receive his entourage.

Kenyatta added in his remarks an inclusive government was “the only way to bring sustainable peace and development.”