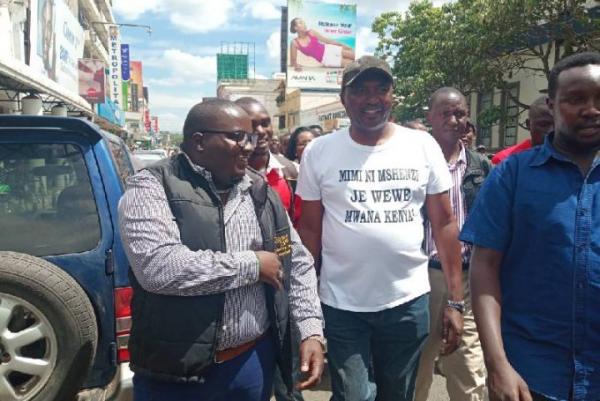 As the storm builds up after President Uhuru Kenyatta’s ‘Washenzi’ comment, leaders are coming out to take sides, some castigating him over the rhetoric.

Bahati MP Kimani Ngunjiri took a walk of defiance in the streets of Nakuru Town clad in white T-Shirt emblazoned ‘Mimi Ni Mshenzi‘, accompanied by his supporters.Uhuru irked Kenyans and Central politicians who criticise him on ignoring them after they turned up in large numbers to vote for him.Speaking at Mama Ngina Drive in Mombasa, Uhuru called those threatening him ‘washenzi’.

“Nitaendelea kuzunguka kila corner ya Kenya na kazi ya maendeleo…kutoka Mombasa hadi Kisumu, Moyale hadi Namanga…hii siasa ya kusema ya kwamba mtu ametoka mahala fulani ati maendeleo itaelekezwa mahala fulani jamani tuwache (I will continue to traverse every corner of Kenya, bringing growth and development; from Kisumu, Moyale, and Namanga. We should stop the belief that development should be channeled towards a particular region because someone comes from there),” he said.Ngunjiri on Tuesday led a demo against the Uhuru slur over Jubilee lawmakers’ agitation for more projects in Central.He joined Gatundu South MP Moses Kuria, who said Kiambu had been neglected in development.Kuria added: “It is in that spirit and in line with the President’s position that I believe Mt Kenya region also deserves development just like any other region. Right now it’s not happening.”