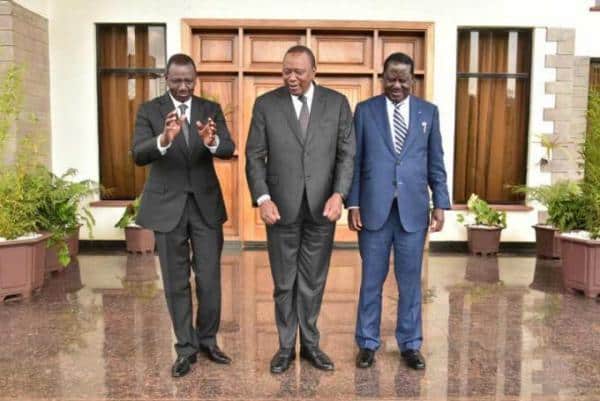 ANALYSIS: This being the first piece in 2019, ‘Happy New Year’ salutation is in order. There are as many predictable as there are unpredictable issues in the year we just ushered in with carousal, tearing of goat ribs, chicken drumsticks and insistent prayers.

The stubborn common denominator is the overt, fervent start of Uhuru succession tussle. That is the theme which will guide and define our politics till 2022 showdown. Whether all or a few of us will reach there is a matter better known to God.
Going by remarks by Uhuru’s friends, there is unease with Deputy President William Ruto. They claim they may not accurately tell how their new ‘friend’ Mr Raila Odinga will treat them if they back him, but also argue they can accurately tell what Ruto would do to, or with them if he gets a chance by triggering and riding on a tidal wave of ‘hustlers’!
It is understandable if this does not make sense at first because, on face value, at least to us outsiders, Uhuru and Ruto are bosom friends who still greet each other with ‘hi fives’, and nice salutations like ‘my brother’. Politics is a game of subterfuge, and what you see is not often what you get.

That there is trouble in Jubilee is beyond question and you can tell from what Ruto’s confidants claim; that the ‘mountain’ people have once again shown an allergy to political reciprocation.
They see the recent wave of graft-related arrests as targeting their man but stop short of pointing out why.
Parliamentary system
However, give it to them for being magnanimous enough to warn that these choices have consequences; to which people of the ‘mountain’ have responded with chilling regurgitation of some of the atrocities of post-election violence. In fact, there already is talk by the Uhuru side that they are discerning threats to their tribesmen in the Rift Valley if they don’t play along.
There are many eyeing the presidency after Uhuru, but there is a complication. This is the attempt to bring in a parliamentary system and an assortment of new offices to share Executive powers. Initially, probably by reading into the scheme whilst considering himself the guy within ‘sniffing’ distance of power in the high-octane race, Ruto shot down the idea of a referendum.

Later, someone must have told him there is one thing he can’t afford to do; to show openly he is at odds with Uhuru. Why? Because Uhuru still holds sway in the numerically strong Central Kenya vote and though for now, Ruto appears to have a slice, this could change drastically if Uhuru sends word to the ground that his deputy is now the flea furrowing his skin.

This is compounded by two factors; Ruto made it his pastime to antagonise and demean not just Raila, but also his political bedrock for which he stood a better chance to charm and inherit as Uhuru exits and with Raila at some point written off.
Second, he appeared to be ‘defying’ Uhuru on armistice with Raila when it seemed to have gelled well with the rest of the country by bringing in a gush of political harmony. A week in politics is a long time, and so is three years, but still, we can assume that on the political chessboard, Ruto has taken the unpopular corner from which Raila has been fighting for the presidency as a rank outsider.

Raila on the other hand, unless he decides to reignite his ‘engine’ inside the Jubilee belly, will be gunning for the presidency, or any of the seats that may come from a different position. Will he score from there? Or will he choose to pass the ball to someone else to score?

So, what next after the fault-line is drawn? Simple, the realignment process will continue and will revolve around who between the Ruto and Uhuru side, and by extension Raila among others, will marshal the kind of Orange ‘Pentagon’ representing the majority from a constellation of, or partial tribal vote baskets.

In this scheme of things, it is not the ‘commoditisation’ of politics and strumming of ‘’dynasties’ string on the political guitar that could count, but who has crafted an all-inclusive power-sharing formula and a reassuring strategy that would not instil fear of the unknown.
A lot will also depend on how Uhuru intends to deploy the power of incumbency and if he will try his hand on the Russian political roulette called (Vladimir) Putin 2008! For now, it is Ruto this way, Raila that way and Uhuru one foot on each side.

VIDEO: Theresa May trolled for her dance moves in Kenya