Henry Waswa: It’s glitzy tale of the man in Uhuru impersonation case: Stunning details of one of the seven men who have been charged with impersonating President Uhuru Kenyatta and fraudulently obtaining Sh10m from Sameer Africa chairman Naushad Merali can be revealed.

From what is published about the 29-year-old man, he has been living like a king. Initial reports said that Henry Waswa was among seven suspects; Duncan Muchai, Isaac Wajekeche, William Simiyu, David Luganya, Gilbert Kirunja and Anthony Wafula who had been arrested for impersonating a senior government officer and socialites to obtain money by false pretenses.It turns out the ‘senior government officer’ was none other than the president.

Before his arrest, the father of two was reported in the media as a flamboyant businessman who owned over five state-of-the-art clubs across the Country and car-hire business.

Waswa grabbed headlines in 2016 when he offered a free air ticket to Saleh Wanjala aka Bungoma’s ‘James Bond’ who hit the headlines after hanging on a helicopter in Bungoma that was ferrying the body of businessman Jacob Juma who was killed in Nairobi in a death that was described as an assassination.

In late 2017, Waswa shocked the sleepy Nzatani Village in Kitui County, after arriving in four choppers   to pay bride price for his wife Moreen Tabitha. A fleet of high end vehicles was on standby to pick his entourage.Reports said the event cost him Sh5 million with a ring the couple exchanged costing a jaw-dropping Sh1.6 million.Details are scanty as to how much bride price was paid, though heavy presence of security men pointed to the hefty amounts that may have exchanged hands.

The lovebirds are said to have been flown to unknown destination outside the country for the main wedding.But the praises has now been cut short after it turns out he was arrested on February 23.According to court papers, investigators were seeking to establish whether the con game had other players, including State House staff.In court today the prosecution asked the court to allow police to detain the seven suspects arrested on February 22-23 for 10 days but the court rejected the request and freed them without bail or bond. They will, however, be required to appear in court for the case.Milimani Senior Principal Magistrate Peter Ooko heard that Sameer Africa Chairman Naushad Merali got a call from 0722 208842 and the caller identified himself as President Uhuru Kenyatta.

The caller had the same voice and tenor as the President.While seeking to detain the suspects for 10 days, Corporal James Mwangi narrated that the caller wanted Sameer chairman to give facilitation fees so that ‘State House’ would assist in purchase of a piece of land.

Mr Merali was not in the country so he directed Sameer Africa Finance Director Akif Hamid Butt to process the money, not knowing that the caller was duping him.The court heard that Mr Butt was told that the money he was to wire was to buy land in Milimani, Nairobi County.Suspects went ahead and gave an Equity Bank account into which he wired Sh10 million.

“The complainant (Butt) was contacted by fraudsters using several telephone numbers purportedly from President Uhuru Kenyatta. The complainant realised he had been dealing with fraudsters after he had lost his Sh10 million,” said Mr Mwangi.? 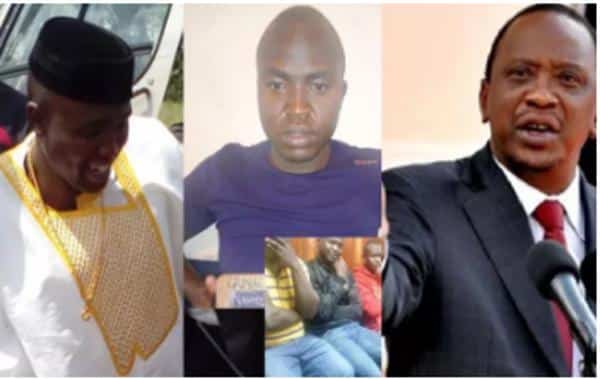 UK to kick out poor immigrants

Kenyan Movie LEO Screening In The US