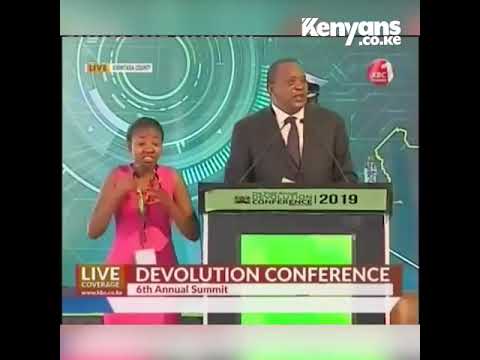 The 6th Devolution Conference in Kirinyaga County turned lively thanks to the animated sign interpreter.

As a standard procedure in such a meeting, two sign language interpreters were on stand-by interpreting the speeches.

Although the two were role-taking in alternation throughout the speeches, it was the lady donning a pink, sleeveless dress who caught many people’s attention. 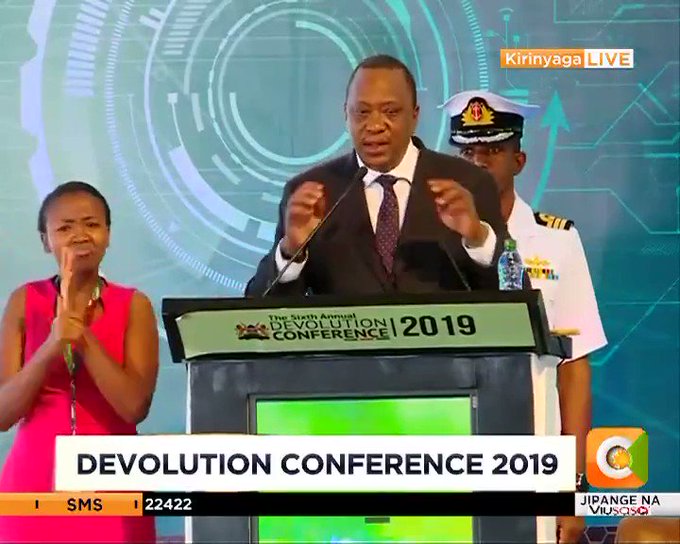 The sign language interpreter at the 6th Annual #DevolutionConference2019 in Kirinyaga County stole the show. Hats off #DevCon2019

The lady appeared to have perfected her language as she took the hearing-impaired through the key note addresses articulating every point with passion.

But it was when President Uhuru Kenyatta was done with the official speech and moved to making his off-the-cuff remarks that the sign interpreter’s prowess became clear.

The sign language interpreter did not only deliver the president’s speech with the basic hands, fingers and mouth gestures.

She went full-board with countless facial expressions to convey the tone and emotion in Uhuru’s speech.

This saw the attendees burst out in laughter on several occasions as the lady mimicked the President’s wrath and scorn against those curtailing the war on corruption.

The sign interpreter’s mastery equally saw netizens heap praises on her as the “favourite person of the day”.

“Big up to the sign language interpreter at the sixth annual Devolution Conference for a job well done. Her facial expressions captured the moment,” a tweep Shaq Bett stated.

“Ears to the President at 6th Devolution Conference in Kirinyaga, attention to the sign language interpreter. The lady is good at it,” Lavin Kevin, another netizen added.

“The sign language interpreter became Uhunye’s unofficial anger translator as he spoke about the fight against corruption,” Philip Wekesa opined.

“I just love how the sign language interpreter is getting it so right, the attitude, the sarcasm, I think she is interpreting in Kiswahili because some facial expression she is doing aren’t European yawa!” Kibet remarked.

“But that interpreter really understands her job, You don’t know sign language but you understand her, including the emotion,” Nderitu Kelvin concluded.

Kenyan Man Dies Due To Excessive Exposure To Cold In Pullman,WA