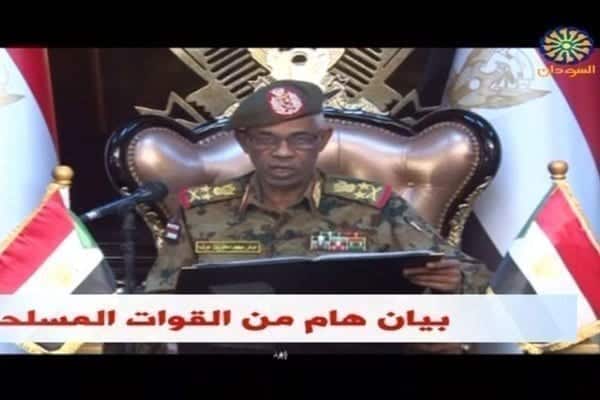 Speaking on state TV, in a long awaited announcement, General Awad Ibn Auf said the armed forces have taken over for a two-year transitional period that will be followed by elections.

Mr Auf, a former vice president, has also announced he will head the High Council of Armed Forces, according to Channel 4 journalist Yousra Elbagir.

A three-month state of emergency has also been put in place with curfew set at 10pm.

“I announce as minister of defence the toppling of the regime and detaining its chief in a secure place,” Ibnouf said.

Bashir, who ruled with an iron fist since he took power in an Islamist-backed coup in 1989, has been removed after deadly force failed to end four months of nationwide protests for his ouster.

The veteran leader, who swept to power in a 1989 coup, was one of Africa’s longest serving presidents. He is wanted on charges of genocide and war crimes by the International Criminal Court.

Since early morning huge crowds of jubilant Sudanese had begun thronging squares across the centre of Khartoum on Thursday as the army promised an “important announcement”.

Chanting “the regime has fallen,” thousands poured into the open ground outside army headquarters where defiant protesters have braved tear gas to keep up an unprecedented sit-in now in its sixth day.

The protests, which erupted in December over the government’s tripling of the price of bread, were the biggest challenge yet to Bashir’s long rule.

The security agency also announced it was freeing all political prisoners.

Army vehicles carrying troops were seen deploying across the centre of Khartoum from early Thursday.

Troops raided the offices of the Islamic Movement, the ideological wing of Bashir’s ruling National Congress Party, witnesses said. And martial music was played on state television as soldiers ordered the TV to halt its normal programming.

Outside army headquarters, dozens of joyful protesters climbed on top of landcruisers and armoured vehicles that had been posted to protect them from intervention by other branches of the security forces.

Professor who could not live without love-commits suicide

Surprising Europe:Promised a job in Italy but now a prostitute