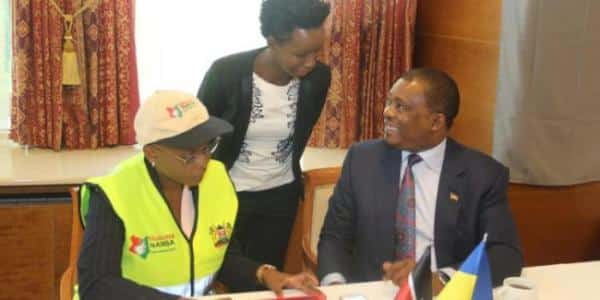 National Assembly Speaker Justin Muturi was in Kyiv, Ukraine, on Monday, to launch Huduma Namba registration for Kenyans living in the country.

This was an initiative by the Ministry of Interior and Coordination of National Government in a bid to make it easier for Kenyans in the diaspora to acquire e-passports.

The speaker expressed his concerns over the fact that most of the students on scholarship abroad might end-up with invalid visas when the deadline for the e-passports lapses on September 1.

Muturi also spoke on the hardships that Kenyans in the diaspora are going through to access the registration centers in embassies and consulates.

He went on to assure the Kenyans that Immigration PS Gordon Kihalangwa had informed him that the government has set up mechanisms to expedite the process before the set deadlines.

” I spoke to PS Kihalangwa last evening when I saw the list of the six stations that are currently registering Kenyans abroad, and he has assured me that they are scaling up efforts to reach out to as many of you as possible,” Muturi added.

During the meeting, the Kenyans, most of whom were students, highlighted the challenges faced by Kenyans living in Eastern Europe as there were fewer Kenyan missions in the region.

The students took the opportunity to express the challenges faced by returnee students who have difficulties getting accreditation back home by various professional bodies back in Kenya, after studying abroad.

They also complained of the troubles they have to endure after returning to the country when it comes to being registered with the various professional bodies.

Muturi and his delegation promised to follow up the raised concerns with the relevant government authorities.

On Monday, Interior CS Fred Matiang’i announced that the deadline for diaspora was June 20.