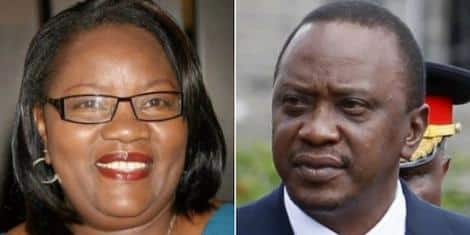 In a video obtained by Citizen Digital, Shebesh stated that the country had given too much credit to Raila and Uhuru yet without mama Ida, Kenya would have gone down a dangerous path in 2018.

“We’re giving too much credit to Uhuru and Raila, I want to tell you the truth today. The handshake between Uhuru and Raila came from Mama Ida,” narrated Shebesh.

“Uhuru told me that if it was not for Mama Ida, he would not have sat down with Raila and he (Raila) would not have listened to him because the tension was high,” she added.

She praised the handshake because the gesture restored peace in the country and she could now travel anywhere without worrying about political tension.

“I am happy that I can now go to Gem and Khwisero and Kisumu without fear, I would not have passed there before (the handshake),” explained Shebesh.

The former Nairobi Woman Representative also dismissed politicians who spoke ill of the unity between President Kenyatta and Odinga.

She urged Kenyans not to take them seriously because they were being paid to trash the peace initiative made by the two leaders.

The handshake has been a bone of contention within the Jubilee Party with some members claiming the inclusion of Odinga in Uhuru’s inner circle has threatened to tear the party apart.

President Kenyatta has defended the former PM by explaining that they have never discussed politics, 2022 succession or party matters, but only share ideas about development projects.

Word of the Day:Slow to Speak