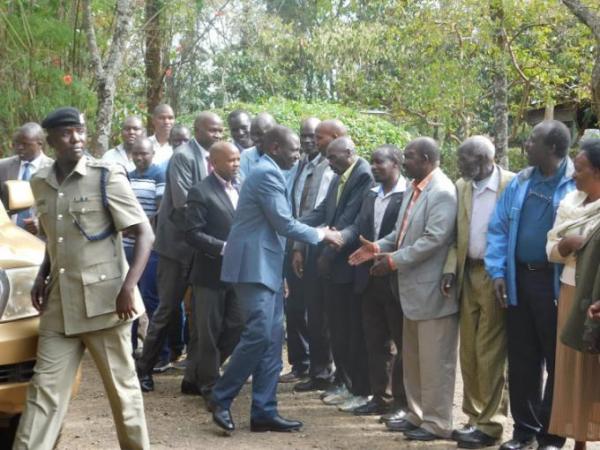 Deputy President William Ruto on Wednesday afternoon flew to Baringo County to convey his message of condolence to the family of the late Jonathan Toritich, the son of former President Daniel Moi.

Unlike President Uhuru Kenyatta who visited retired President Moi at his Kabarak home in Nakuru county on Monday, the DP opted to visit Jonathan’s home in Kabimoi almost 54km away from Kabarak.

Jonathan passed on in Nakuru on Friday last week.

Last year in May, Ruto was blocked from visiting Moi at his home, an issue that brew a political storm.

Ruto had flown to Moi’s home but failed to meet him after waiting for three hours.

It is not clear if Ruto had an appointment, but sources close to the Moi family said there was none.

“We did not know he was coming. A visit like this one is normally organised properly through Mzee’s aides and members of the family, especially his son Gideon, would be asked to be present. He was not present,” a Moi aide said.

Moi’s spokesman Lee Njiru confirmed that Ruto visited but did not see Moi because the 94-year-old former President was with his doctors.

Ruto was greeted by the caretaker, security detail and two pastors.

“Unfortunately, this coincided with the time of Mzee Moi’s routine physical exercise with his doctors. Mzee Moi agreed to meet the visitors at a convenient time another day in the very near future,” the statement said.

This was however just a month after ODM leader and AU special envoy for infrastructure Raila Odinga visited.

A month later, Uhuru visited and was granted access, a situation that was described by Ruto’s allies as a plot to humiliate him.

Nairobi Senator Johnson Sakaja condemned the move, saying Moi is not family property but a leader who served for more than 20 years as Kenya’s President.

Kenya gets the first gospel discotheque