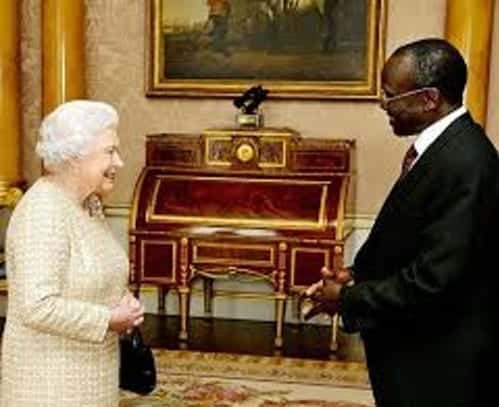 President Uhuru Kenyatta, on Friday, appointed Lazarus Amayo to be the new ambassador to the United States.

Amayo, a former MP, will take over the Washington Office from Robinson Githae, in what is yet another high profile diplomatic appointment for him.

Amayo is arguably Kenya’s most trusted and decorated ambassador. Before his appointment to Washington, Amayo served as Kenya’s permanent representative to the UN, a post he took up in 2018.

Previously, he was Kenya’s High Commissioner to the United Kingdom from 2014 to 2018, serving also as Permanent Representative to the International Maritime Organization (IMO) and the Commonwealth.

From 2010 to 2014, he was the Director of the Division for Europe and the Commonwealth at the Ministry of Foreign Affairs and International Trade.

Between 2006 and 2010, Mr. Amayo served as High Commissioner to Zambia and Malawi, and as Permanent Representative to the Common Market for Eastern and Southern Africa (COMESA).

From 2004 to 2006, he was the acting Permanent Secretary at the Ministry of Foreign Affairs, as well as the acting Director of Administration and Head of International Organizations and Conferences in that Ministry.

He has served as High Commissioner of Kenya to India with concurrent accreditation to Malawi, Sri Lanka, Bangladesh and Singapore from 1999 – 2004.

Amayo was also the Chief Executive Officer of Catering Levy Trustees, a parastatal organization in Kenya, from 1993 to 1997. He also worked as Human Resource Manager with the Kenya Posts and Telecommunications Corporation.

Prior to his diplomatic service, he was elected member of parliament for Karachuonyo Constituency from 1989 – 1992 elected on a KANU ticket. He also served as Assistant Minister of Education in the same period.

He holds a Masters of Arts degree in Political Science from the University of Delhi in India and Bachelor of Liberal Arts degree from Spicer Memorial College in India.

He is married and is blessed with three children.

Video of Man Tortured for 13 Hours Moves DCI to Action