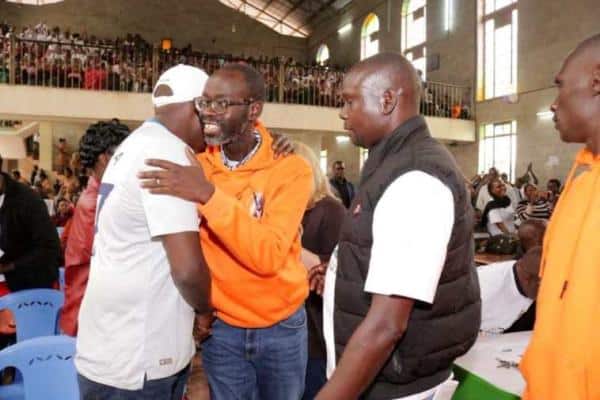 Kibra Member of Parliament Kenneth Okoth jetted back to the country after a prolonged medical trip abroad.

He came back just in time to attend the annual Kibra Music Festival which he attended on Sunday where he thrilled Kenyans when he took up the mic.

The legislator warmed hearts after he sang a few words from Roho Yangu, a song by the celebrated Tanzanian crooner Rich Mavoko.

Okoth was thanking Timothy Wanyonyi who brought bursary cheques to the school going children at a time he was undergoing treatment.

According to the Kibra MP, he was making reference to the importance of young folks listening to the words of the forefathers when he sang the song.

He additionally expressed his gratitude to the Westlands MP explaining that he always supported him whenever he asked for help.

“You are my elder, my mentor and whenever there is anything needed in Kibra, I pray that you come and help,” the Kibra MP expressed.

He also thanked Nairobi Senator Johnston Sakaja for stepping in and ensuring his various projects took off during his absence.

“Our children have immeasurable talent; it’s a joy to give them a platform to showcase these talents on stage through song, dance, and poetry,” he remarked.

Last week, Kenyans took to social media to encourage the MP, who earlier in the year disclosed that he had been diagnosed with stage four colorectal cancer with metastases to the liver.

Many have also lauded him for his brave fight against the disease that has in the recent past claimed the lives of many prominent individuals.