VIDEO: Kenyans Reacts To Kriss Darlin Kneeling Before Raila In Kibra: Politics is about pulling stunts to get recognized and NTV presenter, Kriss Darlin, is a man who made his intention for Kibra seat clear in an unorthodox way.

The DJ knelt before the party leader Raila Odingabegging for the veteran politician to hold his hand adding that he would take a bullet for the former premier if that would let him lead the country in 2022.

“I have heard that there are many young men in Parliament fighting Baba (Raila), allow me as their fellow youth to go fight them in there as you wait to fight in 2022. Let them shoot me if it means that you remain and lead in 2022. I ask that you hold my hand Baba,” stated Darlin amid cheers from the crowd.

His stunt elicited mixed reactions for Kenyans online. Some of the opinion that his stunt was part of the politics game and he played his cards right to get attention.

Musician Suzzanne Owiyo didn’t find any fault in his stunt adding, “Kriss Darlin needed to prove himself at the moment! In a podium like that and being new in the game, you must find a way to be different. I wish him plus other candidates well! Kibra politics is not a joke.”

“Why are you attacking Kris Darling and you know how people vote in Kibra, you must be aligned with Baba. If he shows some respect by kneeling down. If Baba buys it, he is the next Kibra MP,” another user wrote.

Others faulted him for stooping too low in a bid to get the MP seat.

“Kriss Darlin this is a total disgrace. How can you kneel before your fellow human being just because you want power? Concentrate on DJ,” another stated.

“This is mediocrity of the highest order! How can a man with balls kneel before a man? Kriss Darlin this is bending so low! Go ahead and worship Raila,”

“The people of Kibera please don’t vote in Kriss darling. Make wise decisions. Vote for a leader who kneels before you and not the despot Raila Odinga. He’s so clear that he wants to represent Raila and not you,” a netizen wrote. 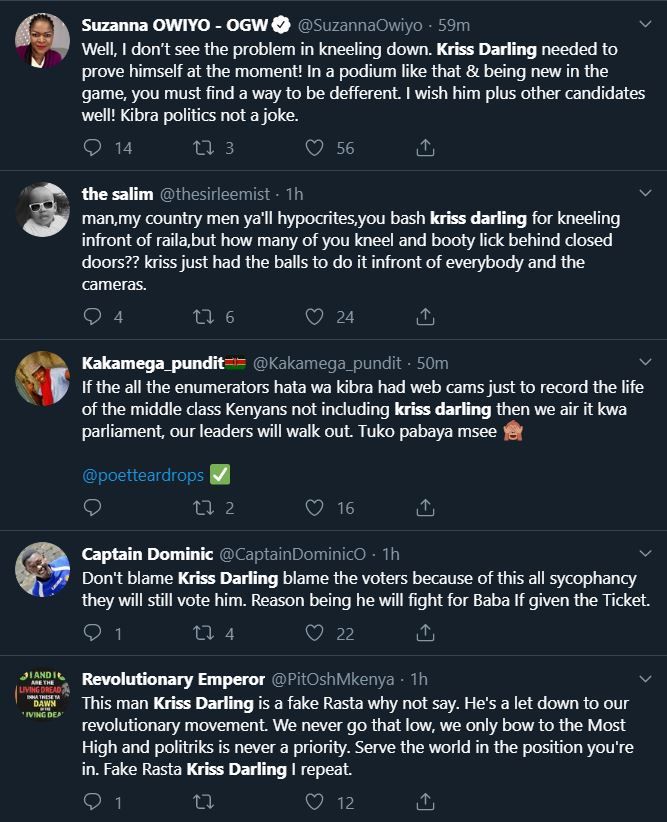 From the archives, Kenyans brought up Kriss Darlin’s dalliance with President Uhuru Kenyatta during the 2017 elections.

Here is a video:

Kenyan Pastor Passes Away In UK