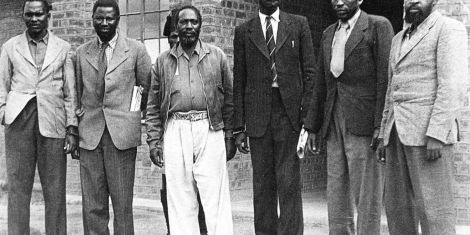 Startling details of former minister Fred Kubai’s 4 Wives and his Househelp: Tales have been told of freedom fighters who worked night and day to liberate the country from the claws of colonial rule.

However, little is known about their personal lives. One such case is Fred Kubai, a freedom fighter, and former Cabinet Minister.

The late Kubai, put lightly, was a man of many wives, and at the time of his death left a will.

Kubai had allegedly parted ways with his wives before his heart settled on Christina Gakuhi,ahead of his death on Madaraka day, 1996.

The two-page handwritten will, left by Kubai, entrusted his entire estate to Ms.Gakuhi, who Kubai’s four wives and children claimed was their househelp.

The second page of the will was written in capital letters, stating how he parted ways with his four wives.

The Will further outlined that he (Kubai) wanted to be buried within 36 hours of his death.

Gakuhi who was entrusted with the Kubai estate, was also given her powers to execute the will.

She was also to oversee his internment and ensure that the burial would only be conducted by a few family members.

Despite his political status, Kubai demanded a cheap coffin made from off-cut timber without any flowers to decorate the casket or graveside.

He additionally, discouraged any Harambee collection, to cover the burial expenses as well as speeches, feasting, drinking of alcohol or singing at his send-off ceremony.

The former assistant Minister’s wives and children, not conceding defeat, took the matter to court, accusing Gakuhi of forging the will, dated January 19, 1991.

The Will became the subject of a 23-year succession battle between the four wives and children who ganged up against Ms. Gakuhi.

As fate would have it, the Family court found that forgery charges against Gakuhi were illegal.

Justice Chacha Mwita ruled that former Director of Public Prosecutions(DPP) Keriako Tobikobreached the law when he allowed the woman to be charged in a succession case.

Family Court justice Ongeri, in her judgment dated August 2, 2019, and seen by The Standard, found that the will was valid and that the patriarch had taken care of each of his children.

RACISM IN U.S.A.-THE MONSTER TO FEAR MORE THAN TERRORISM-PART TWO

Video:Wedding Drama In Nyeri as a woman tries to stop the ceremony,