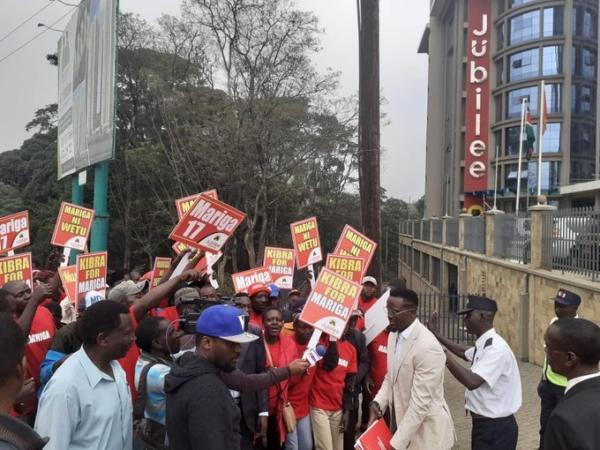 The former Harambee Stars player arrived at the Jubilee headquarters with his supporters to be interviewed by the Jubilee National Election board ahead of the Kibra by-election slated for November 7.

Supporters, holding placards written “Kibra For Mariga; Mariga Ni Wetu”, sang songs in praise of Mariga as they made their way into the Jubilee headquarters.

Footballer McDonald Mariga among 16 candidates cleared by Jubilee to contest for party ticket for Kibra by-election.

Speaking after submitting his documents, Mariga said he wants to give back to the community, adding that he was once a resident of Karanja area in Kibra constituency.

Mariga is among 16 candidates who are contesting for the Jubilee party ticket.

The 32-year-old was playing for the Italian football giant, Inter Milan, but is currently without a club.

Why Uhuru Kenyatta has turned into an angry, irritable…

Previously, he has also played for Real Sociedad, Parma, Helsingborg, and Real Oviedo.

ODM will conduct its party primaries on Saturday, September 7.

The seat fell vacant following the demise of Ken Okoth, who succumbed to colorectal cancer on July 26 at the Nairobi Hospital.