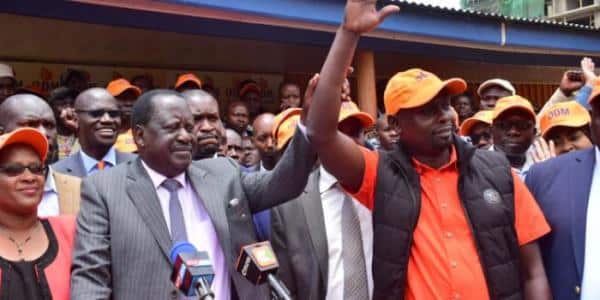 On Saturday, September 21, the Orange Democratic Party’s leadership announced a new door-to-door strategy of campaigning in an effort to beat Jubilee candidate McDonald Mariga in the constituency’s upcoming by-election.

In a video that surfaced on Monday, September 30, the strategy is seemingly not working as expected after chaos erupted during the campaigns.

ODM candidate Imran Okoth, who is entangled in the chaos, was moving from door to door in his campaigns when rowdy youth started fighting.

The video shows the voters pushing and pulling each other around while drumming sounds emanate from the background.

The former premier adopted the door-to-door strategy for the first time this by-election season as opposed to his frenzied public rallies that his supporters are accustomed to.

Raila’s party has had a firm grip of Kibra constituency for the last three decades of Raila’s political life.

In an interview with Daily Nation, ODM Director of Elections and Suna East MP Junet Mohamed explained that they had adopted the new strategy because it was more personalized.

“This time we are going from door to door. We have left rallies to Owalo (ANC candidate) and Mudavadi,” Junet stated.

To prove their seriousness, the party cancelled a rally that was to be held at the Kibera DC grounds on the same day the strategy was announced.