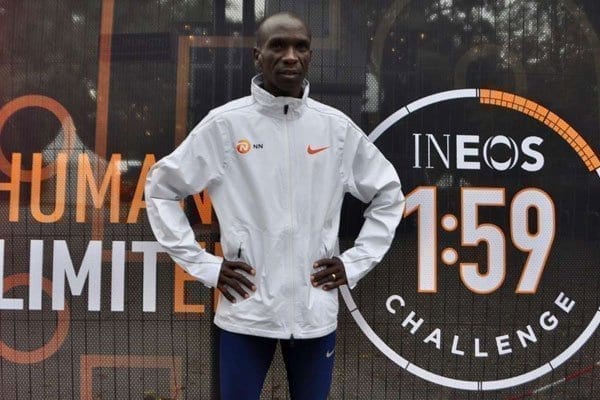 His humility, commitment and courage to face the task ahead is unrivalled in the world of sports as he competes against the clock.

A four-time champion of the London Marathon, Kipchoge has very little to prove to the world that he is the greatest marathoner of all time. In his own words, he wants to show that there are no barriers when you believe in yourself and try and trust in what you are doing.

But the race will not just be to inspire the world. There will be billions of shillings that will be made this weekend. Companies do not just throw away money and get nothing in return.

So just what is the business side of Eliud Kipchoge’s challenge?

INEOS, the main company behind the 1:59 Challenge, is a manufacturer of petrochemicals, specialty chemicals and oil products.

The firm says that it produces raw materials essential in the manufacture of a wide variety of goods from paints to plastics, textiles to technology and medicines to mobile phones.

Though it has not explicitly gone out of its way to market its products, it will have earned immeasurable returns on its brand equity whichever way the outcome of the 42-kilometre race is.

When the race it done and dusted, it will also have positioned its health products as some of the best at getting the best out of humans.

“INEOS has been built on the belief that innovation and modern products can make life better, that individuals can excel when challenged and great teams can achieve extraordinary results. Our move into sport is the natural progression of those ideals,” the firm says on its website.

The firm operates across 171 sites in 24 countries around the world. And to get the maximum out of the race, it describes its products in no less terms.

“Our products make the modern world possible, and most people rely on them every day.”

“Our ambition is that this Challenge will also inspire future generations to get running and to get fit for life including through our participation initiatives,” it says.

The race will give its Daily Mile programme a new shot in the arm. The Daily Mile is an initiative aimed at improving the health and well-being of children.

It helps children to be active, whatever their personal circumstances. About 1.7 million children currently take part in the activity every day. If it gets nothing in return, its brand will not come out on nil.

The host country, Austria will also be a big winner having been chosen to host such a historical event. From tourism to hospitality, images of the host nation, its conducive environment for sports will be great selling points for the country.

Global shoemaker Nike will also have an opportunity to showcase the state-of-the-art Sh25000 shoe it has redesigned specifically for the race. The race should boost its footwear sales in coming months.

Back in the country, some of the companies that are riding on this global spectacle include Safaricom and Isuzu, which have never left his side. Safaricom has offered free internet bundles for its subscribers to watch the race back here at home.

It is also pushing its M-Pesa brand having changed its logo, to endear it further to Kenyans, putting it miles ahead of competitors. Isuzu will gift Kipchoge, who is also the Isuzu’s D-Max Brand Ambassador, a brand new car estimated to be worth Sh4million.

Kenya Airways missed the opportunity to market its brand and warm itself back into the hearts of Kenyans after Kipchoge flew out on a private jet – Gulfstream G280 – owned by one of Great Britain’s richest persons, Sir Jim Ratcliffe, the founder of INEOS.

INEOS also owns Belstaff, the luxury motorcycle cloth maker and plans to build an off-road vehicle based on the Land Rover Defender, which was discontinued in 2016.

Global Sports Communications, which manages Kipchoge, will also be a major beneficiary of the race, given that it will be another opportunity to market their NN Running Team that brings together top running athletes in the world.

The media will also be some of the big winners over the weekend. YouTube has an exclusive deal to do a live social channel.

Eurosport will be airing the race across 54 countries in Europe while ORF will be the host broadcaster in Austria. The other broadcasters showing the INEOS 1:59 Challenge live include Direct TV, Network Seven, Band Sport, L’Equipe 21 and Canal+.

Also on the list are, Fox Sports, Marca Claro, Sky NZ and StarTimes among others. In Kenya, NTV, KTN, KBC and Citizen TV will broadcast the event.

Media makes money through advertising and the event will hand broadcasters around the world billions to share.