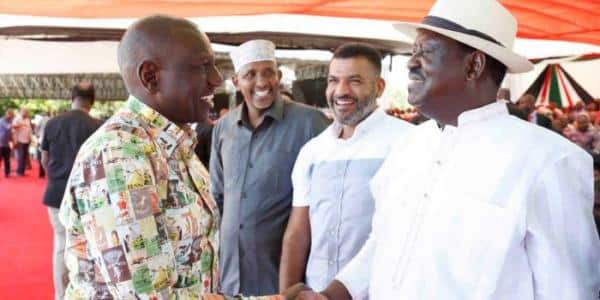 Speaking during the Mashujaa day celebrations held at Mama Ngina Waterfront, the former Prime Minister focused heavily on the BBI, which he claimed was unstoppable, going on to urge Kenyans to embrace it.

However, despite Raila and Mombasa Governor, Hassan Joho‘s attempts to lure the Jubilee party leaders into speaking on the BBI, the two steered clear of the topic altogether.

Uhuru opted to use his time on the podium to applaud the various men and women who went out of their way to ensure that justice was served, terming them as the country’s real heroes.

“They are the investigators and prosecutors who brave intimidation and reject inducements so as to bring the corrupt and other criminals to face justice,” the president stated during his address.

His deputy, on the other hand, took to the podium and emphasised the need to shun divisive politics that fostered ethnicity.

Governor Joho had tried to bait him by openly asking him to embrace the spirit of the handshake deal as he welcomed him to the podium, but the DP Ruto simply sidestepped the entire topic.

“Nikiwa namkaribisha mheshimiwa naibu wa Rais, na pia namkaribisha aje aunge mkono mambo ya handshake, loosely translating to, as I welcome his excellency the deputy president, I also urge him to embrace the handshake deal and its projects,” Joho stated as he welcomed DP Ruto to address the public.

According to the Daily Nation, the BBI taskforce is expected to complete the final draft which they are expected to present to President Uhuru on Wednesday, October 23, 2019.

Uhuru, during the recent launch of Phase 2A of the Standard Gauge Railway, announced that he would traverse the country to drum up support for the BBI, going on to state that it was part of his grand plan to leave a lasting legacy.

The BBI is shaping up to be one of the most hotly contested projects, with DP Ruto Recently tweeting that Raila and Uhuru’s pet project would have to undergo another round of validation by Kenyans.

“As a democratic society the proposals by the BBI will be subjected to an open national conversation where every voice will be heard,” he stated.