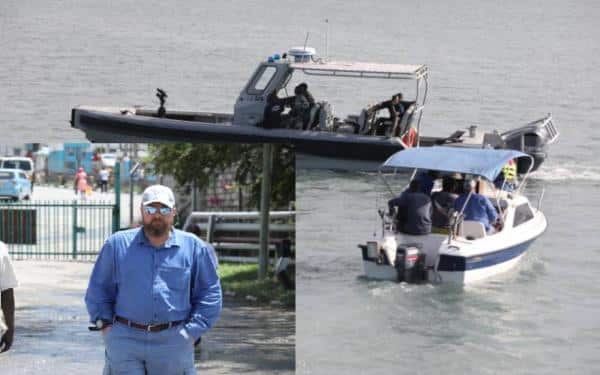 Swedish diver apologises to Kenyans after failing to recover Likoni bodies: Hopes of recovering two bodies and a car that slipped and plunged into the ocean at the Likoni Channel last Sunday were dashed last evening when a Swedish scuba diver failed to locate them.

Volker Bassen like other divers blamed lack of visibility for the difficult in making the recovery even after promising Kenyans he would accomplish the job just in two hours.

Bassen at the centre of focus yesterday at the channel but after his last dive that lasted for 32 minutes, he declared the task was difficult and risky due to poor visibility and deep channel and hence apologized to Kenyans for underestimating the work required in the operation.

“I want to retract on my earlier statement that I would recover the car and the bodies in just two hours. There is zero visibility and channel is very deep,” he said, praising the Kenya Navy divers whom he worked with for being “brilliant”.

“Divers are putting their lives on the line. This is a recovery process and not a rescue mission and it is time to reflect on the risks involved.”Bassen had earlier inspired hope to the family and friends of Mariam Kighenda and her daughter Amanda Mutheu when he joined a multi-agency Government operation at the Likoni Channel.

The two sunk on Sunday evening when their car slid and plunged into the Indian Ocean when Mv Harambe was in motion midstream.

The Swedish said he would not be present today, but noted he had identified a spot with a Kenya Navy diver in front of the island ramp that was promising and would be searched while he was away.

Government spokesman Cyrus Oguna who accompanied Mr Bassen said searchers made 16 dives yesterday in three places where they hoped to make a recovery but they did not succeed.

He said the operation headed by Kenya Navy would continue today.“We still have hope of recovering the bodies.

Our divers are making all the efforts to complete the task even with the challenges identified,” he said.Bassen,51, and his divers from Diani in Kwale set out for the search on a small boat at 11.15 am as family and friends Sunday watched from a tent erected at the seaside in abated breath.

But at dusk, hopes of the family members were diminished as the diver could not bring any good news after the daylong operation.In an interview, Ms Jackline Wafula, aunt to John Wambua, the husband to Kighenda said they were inspired to see the Swedish join the search mission.

“We felt inspired and energised that additional divers have arrived to support the ongoing search. We hope they will succeed,” she said.