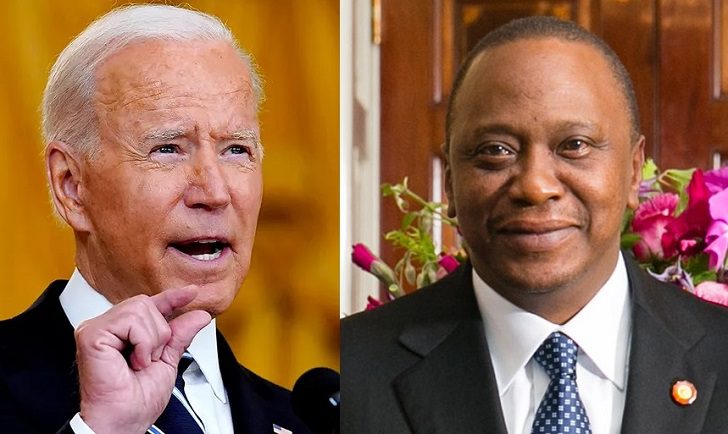 A US senator is calling on President Joe Biden to prioritise the fight against corruption, political violence and rising debt ahead of his meeting with Kenyan counterpart Uhuru Kenyatta.

Idaho’s Republican Senator Jim Risch, a ranking member of the Foreign Relations Committee, said on Wednesday the meeting should focus on endemic problems Kenya is facing, as well as security concerns in neighbouring Ethiopia.

Risch said that Kenya, as a strategic partner in East Africa, should be supported to enhance regional security, especially in the fight against terrorism

“I remain concerned, however, about deep government corruption, ongoing incidents of intercommunal violence in several parts of the country, and increasing debt to China,” he said.

“Kenya is also preparing for a contentious election with a potentially violent ethnic dimension in 2022.”

President Biden is expected to host President Kenyatta at the White House on Thursday, a first meeting for the US leader with an African head of state since he took power in January this year.

Jen Psaki, the White House press secretary, said the US leader will host the Kenyan counterpart at the White House in Washington to discuss issues around bilateral ties.

“The leaders will discuss the strong US-Kenyan bilateral relationship and the need to bring transparency and accountability to domestic and international financial systems,” she said in a statement.

The meeting comes as Kenya presides over the UN Security Council for the month of October. But it also comes as Kenya faces violence in Laikipia that police say is fuelled by bandits. Kenya is also preparing for a General Election next year, with uncertainties surrounding the security situation after the vote. The previous two General Elections were followed by sporadic incidents of violence.

On Tuesday, though, on the side-lines of the UN Security Council meeting, President Kenyatta indicated that the revelations did not mention his name in particular nor imply a criminal motive.

“My name, first and foremost, is not there,” he told a media stake-out after the Council meeting on Tuesday in New York.

“And secondly there has been no mention of any illegality or wrongdoing on my part,” he added, promising, again, to provide a “comprehensive” response later this week.

The US has also pressured Ethiopia to start dialogue with the Tigray People’s Liberation Front, a one-time ruling party now proscribed in Ethiopia. On Wednesday, Secretary of State Antony Blinken announced a further $26 million worth of humanitarian aid to Tigray, but called on Ethiopia to allow independent investigations into atrocities committed by both sides.

Kenya, a member of the Security Council until December next year, has said Ethiopia needs encouragement, not sanctions, for parties to lay down arms, open humanitarian corridors and discuss the future.

Addis Ababa, however, has launched another aerial offensive on Tigray, worsening the security situation. Biden signed an executive order in September, authorising the imposition of sanctions on individuals who spoil the peace. The sanctions have not yet been implemented.

“I am closely monitoring how Kenya uses its position as president of the UN Security Council in October to elevate the issues related to the crises in Ethiopia,” Risch said.

“The Biden administration should make these issues front and centre in discussions with President Kenyatta and other senior Kenyan officials this week.”

Video: Joy Mukwanjero’s tale after 21 years in US and homelessness in 254