Speaking during a campaign rally at Laini Saba area in Kibra, Raila tore into the Jubilee Party candidate for the November 7 by-election. 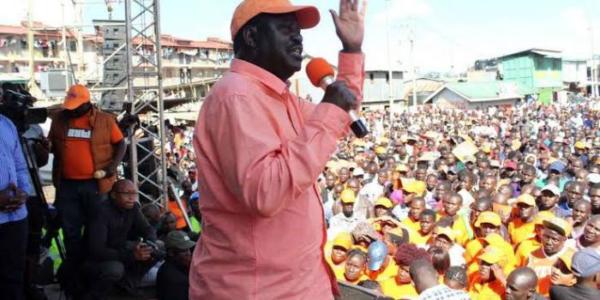 He not only attacked the ruling party’s manifesto for the area but went on to liken Mariga to body hair via a comical riddle that left the thousands of residents in stitches.

The opposition leader went on to urge the people of Kibra to ignore the advances made by Jubilee, promising them that the constituency was a key feature in the long-term development blueprint for the country dubbed Kenya Vision 2030.

“Kibra ni part of Vision 2030 program ambayo tumeweka huku ya kumairisha maendeleo ya eneo hili na itafanyika, loosely translating to, Kibra has been part of Kenya Vision 2030 in which various development plans have already been laid out and they will be implemented,” he announced.

He went to mock Deputy President William Ruto and his party’s candidate whom he accused of using underhand tricks by promising Kibra residents development projects already been drawn up under the Kenya Vision 2030 blueprint.

Ruto had earlier on made a list of pledges to the residents of Kibra, that would be fast-tracked if they chose McDonald Mariga as their Member of Parliament during the November 7 by-election.

Raila then narrated his body hair riddle that sent the crowd in a frenzy of laughter.