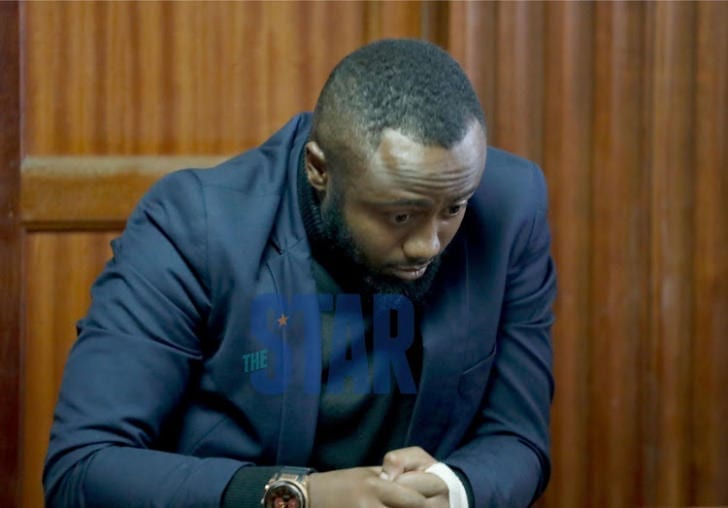 The DNA of an unknown male was discovered on strappings collected from Monica Kimani’s apartment, the court has heard.

A report given to the court on Tuesday showed strappings taken for testing revealed the DNA of Monica and an unknown male.

“The DNA from the strapping in Monica’s house was of a mixed profile, the major contributor matching the profile generated from the blood sample labeled Monica with a random probability of match and a minor contributor is an unknown male profile,” Government analyst Joseph Kagunda Kimani said.

This is even as blood samples from khaki shorts said to belong to Jowie matched that of Monica’s blood.

Kagunda told the court there was a small blood stain on Jowie’s brown shorts taken from his house by the police to the Government Chemist for analysis.

Kagunda was testifying in the case where Jowie has been charged alongside his ex-fiancée Jacque Maribe with the murder of Monica.

The report lists 73 items that were tested during the investigations in to the murder of Monica, which happened on September 19, 2018 in her apartment at Lamuria Gardens in Kilimani.

The Government Chemist was tasked to analyse items derived from Monica’s apartment, Maribe’s residence where Jowie was living, and her car for criminal investigations.

The items were received from the Government Chemist from September 25 and October 5, 9 and 24 last year.

In the report, the DNA generated from the swab from the rim of the empty Tusker can was of an unknown male origin.

“The DNA generated from the swab from the rim of the empty Tusker can was of an unknown male origin,” reads the report.

The DNA generated from the swab from gear lever was from an unknown female origin.

The swab from the glass and empty beer bottle  generated a partial  mixed profile.

The late Monica Kimani introduced Joseph Irungu, alias Jowie, to her friend as a security expert working for Interpol and the Office of the President.

Lee Omondi testified on Tuesday in Monica’s murder case in which Jowie has been charged alongside Maribe with her death.

Omondi told Justice James Wakiaga that he went to Monica’s house on September 19, 2018, to collect documents from her and met Jowie, who was introduced to him as Joe, and a neighbour by the name Walid.

Monica told him that Jowie was a security expert working with Interpol and in the Office of the President. Walid was introduced as a neighbour who had come to see her after she got back from Juba, South Sudan.

Word of the Day:Be an Encourager