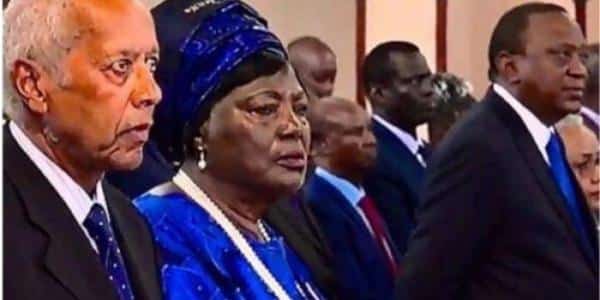 While President Uhuru Kenyatta remains the most famous son of Kenya’s first President Mzee Jomo Kenyatta, a number of his siblings prefer keeping a low profile, despite being members of the prominent family.

One such is Peter Magana, the only child between the founding father and his British wife Edna Clarke, who is rarely in the public limelight.

Not much is known about Magana whose presence in Kenya has been fleeting.

According to a publication by Standard Media Group, Magana was born on August 11, 1944, in Worthing Hospital within West Sussex, United Kingdom.

He retired from BBC where he worked as a presenter before being a producer at the same station.

Kenyatta left the UK barely two years after Magana was born and returned to Kenya where he married his third wife, Grace Wanjiku, Senior Chief Koinange’s daughter and sister to Mbiyu Koinange.

During the inauguration of President Uhuru Kenyatta in 2013, Magana was among the distinguished guests that graced the event.

On August 22 ,2019, Magana flew to Kenya to attend what would be the last public memorial service for his late father Mzee Jomo Kenyatta.

At one point, Mzee Jomo Kenyatta is said to have tried to entice Magana into moving to Kenya by offering him a post in his government but to his surprise, the young man opted to go back to the UK.

Magana is a family man, married with three children.

Diaspora stories: Dr.Onesimus shares experience of teaching in community college in US