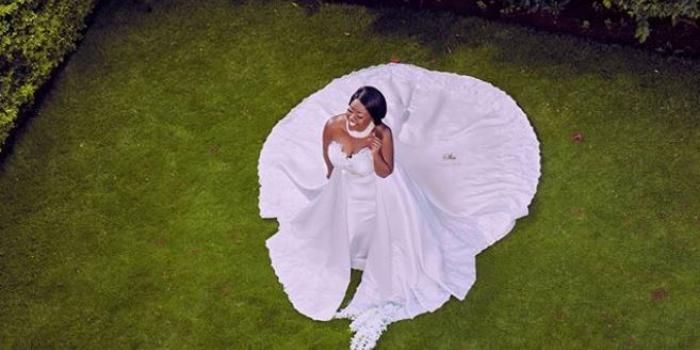 Former Kiss FM presenter Kalekye Mumo, on Monday, January 13, cast doubts in the minds of Kenyans after she shared a photo of herself in a wedding gown.

The photo, which she posted on her Instagram page, captured her in a  joyous mood suggesting that she could have tied the knot over the preceding weekend.

It was an overhead shot and she seemed to be dancing while all smiles, depicting the typical imagery of wedding photoshoots.

Kenyans rushed to her comment section to offer their congratulatory remarks in the belief that she had wedded.

Their convictions were further strengthened by actress-designer Neomi Ng’ang’a’s comment below the post who thanked the former radio queen for trusting her company with her ‘big day’.

Ng’ang’a’s company, Style by Neomi, which specialises on styling curvy women under the ‘Team Curvy Kenya’ movement, was the brains behind the gown.

“You looked absolutely beautiful. Thank you so much for trusting us with your big day. It was such an honor to work with you.

“Wishing you nothing but lots of love… in your next chapter,” shared Ng’ang’a.

When Kenyans.co.ke reached out to Neomi to clarify her statement, she directed us to Mumo with the statement, “Let Kalekye say that.”

The media personality had previously flaunted a ring before shortly clarifying on KTN Leo Wikendi in 2014 that she was engaged to her music.

Attempts to reach Kalekye for confirmation were futile as our calls and text messages went unanswered by the time of publication.