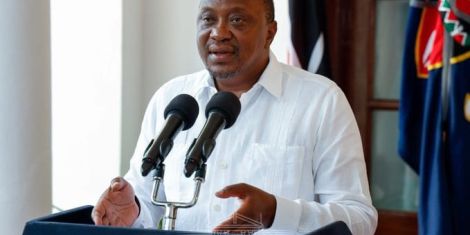 The president, who was delivering a speech on security matters in the country, sought to find out why Ms Mengich was not rewarding police officers who were in the field combating terrorism.

“The Public Service Commission, SRC and the National Police Service Commission should structure a way to reward good and effective performance by officers serving within our the public sector…na by the way, sijui watu wa Salaries wako wapi? (by the way, where are the SRC officials?),” the president probed while looking back, prompting Mengich to stand.

While addressing her, the president inquired why the officers had not already started receiving their field allowances.

“Sasa wewe mama si tulisema hawa watu wapate field allowance, mnakataa kuwapea kwanini? (Didn’t I give an order that officers should receive field allowances? Why is that not happening?)” he inquired.

Additionally, the head of state asked Interior Cabinet Secretary Fred Matiang’i, who had also stood, to work with the SRC boss to ensure that the officers got their allowances from January 2020.

“They should start receiving their allowances this month,” the president ordered.

Further, the Uhuru announced a new comprehensive strategy to deal with terrorism and radical extremism.

“Any and all means by which the enemy is generating income from Kenya including contraband goods and illegal trade must be stopped.

South African chef ‘too fat’ to live in New Zealand