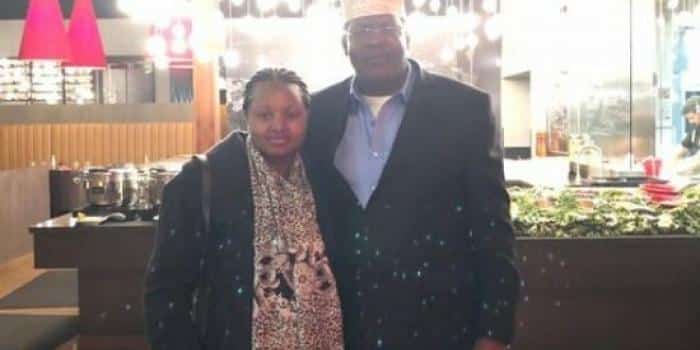 In the spirit of Valentines, controversial barrister Miguna Miguna took to social media on Thursday, February 13 to celebrate his family.

The Canada-based lawyer shared a photo of himself with his wife Jane Miguna and their three daughters, noting that he was celebrating their 20th marriage anniversary.

“My lovely wife, the girls and I celebrated our 20th anniversary of marriage, revolutionary love, affection and focus,” Miguna stated, further throwing shade at what he has always referenced to as poor leadership in Kenya, “No matter what the despots and conmen do, we are focused like laser beams! Viva!”

The images created a buzz online especially for the fact that the self-professed Pan African revolutionist keeps his family away from the limelight attracted by politics.

Kenyans who got the rare glimpse of the photos could not hide their amusement, with a number congratulating him on the 20-year milestone, and for others “Happy valentines” was it.

Known for his vocal criticism of Kenya’s leadership and the no-nonsense image he portrays, netizen Mercy Kilel noted, “I know these are the only people (Miguna’s family) who can neutralize the general! Even a lion drinks milk.”

Miguna countered the statement, explaining that he wasn’t neutralised by his family but rather empowered.

“That’s too romantic to have come from a general. Then you say, revolutionary love. You’ve got a beautiful, organized and a focused family. Happy anniversary,” Omondi Onyango stated.

On May 12, 2019, Miguna wished his wife a happy birthday on social media followed by a romantic message.

“To my lovely wife, the mother of my children, happy birthday and enjoy Mother’s Day. The struggle is well watered and fertilized by organic African beauty! Aluta continua! Viva!” Miguna posted on Twitter then.

Media reports indicate that Miguna and Jane met after the lawyer made a trip to Kenya and a courtship commencing in1998 and ended up in a traditional wedding ceremony on August 6, 2000.

However, it is reported that the barrister was in an earlier marriage with Tracey Wynter Miguna between 1994 and 1998. Together, they had their firstborn daughter Atieno Juma on July 14, 1995, and welcomed their second-born son on December 4, 1996.

Miguna and Jane have three children with two of them being twins.