Political marriages and fallouts that have shaped the politics of Kenya

Political marriages and fallouts that have shaped the politics of Kenya 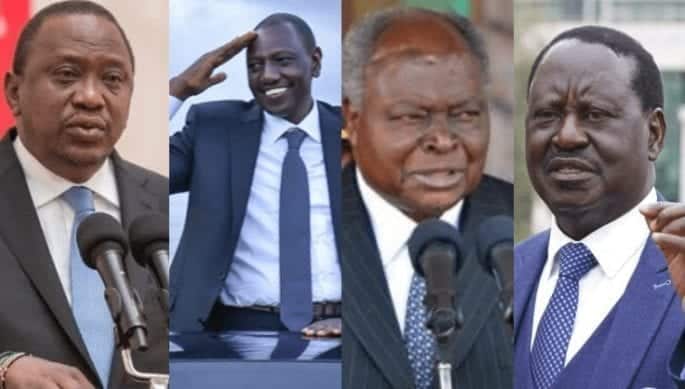 Politics is a dirty game filled with empty promises to both the electorate and political partners. Kenyan politics since independence is a classic example of the use-and-dump affair. Below are some political marriages and fallouts that have shaped the politics of the land;

These two gentlemen (among others) are considered the founding fathers of Kenya. They played a pivotal role in liberating Kenya from colonial rule. Kenya attained her independence whilst Jomo was still held at Lodwar Prison. The then Governor, Sir Patrick Renison, approached Jaramogi Odinga and wooed him to take up the leadership of the then newly born nation. Jaramogi declined the offer. He argued that he would be seen as a traitor- tantamount to betraying his people. He went further and gave a condition; that Jomo must be released and that he was the right person to take up leadership.

This was a gentleman. Kenyatta was released owing to pressure by fellow freedom fighters. A good relationship between Jomo Kenyatta and Oginga Odinga was short-lived. Power struggles between the two leaders set them on a bitter warpath. This led to bitter political rivalry between the communities they represented. One wonders how such political buddies would turn to fierce rivals. The latest attempt to resolve this historical enmity is the 2018 Handshake between their sons, President Uhuru Kenyatta and Former Prime Minister Raila Odinga.

Daniel Toroitich Arap Moi was the second President of Kenya. He ascended to the seat of President after Mzee Jomo Kenyatta passed on in 1978 amid resistance from a section of Mt. Kenya leaders. Prof. George Saitoti was Moi’s Vice President and Kenya’s sixth Vice President. He served as Moi’s VP for thirteen years- the longest-serving Vice President in the history of Kenya.

When the time came for President Moi to retire in 2002, it was the general public’s expectation that Moi would pick Professor Saitoti to succeed him. To the public’s shock, the President picked little known and young Uhuru Kenyatta as his heir. This made Professor Saitoti disgruntled; he quit Moi’s party (KANU) and joined the NARC Rainbow Coalition, whose Presidential candidate was Mr. Emilio, Mwai Kibaki. Mwai Kibaki overwhelmingly beat Uhuru Kenyatta in that Presidential election.

After President Moi picked Uhuru Kenyatta as his preferred heir in 2002, Raila Odinga, Mwai Kibaki, Michael Kijana Wamalwa, Charity Ngilu, George Saitoti, and many others teamed up in the NARC Rainbow Coalition. The rainbow coalition won the Presidential election. It was the hope of Raila Odinga that Mwai Kibaki would honour a preelection Memorandum Of Understanding by the coalition’s top brass to create the position of Prime Minister and give this role to Mr. Odinga. The MOU was dishonoured.

This led to a political spat between Mr. Kibaki and Mr. Odinga. They fell out. Mr. Odinga became Kibaki’s fiercest critic. In the 2005 constitutional referendum, the Raila led the No camp beat while Kibaki led the Yes camp. This led to the birth of the Orange Democratic Movement party with Odinga as its party leader. Mr. Odinga contested for Presidency in 2007 against Mwai Kibaki on an Orange Democratic Movement ticket and lost to Mwai Kibaki. Various parts of the country were rocked by post-election violence.

To stop the chaos, Mwai Kibaki and Raila Odinga formed a coalition government- 50-50 power-sharing basis in a deal that was brokered by a panel of eminent personalities led by the former United Nations Secretary-General, the Late Dr. Kofi Annan. The coalition government was faced with power-sharing challenges, albeit it lasted its full term. Mwai Kibaki completed his second term “silently” without endorsing anyone to succeed him publicly.

The 2007/2008 post-election chaos saw six Kenyans indicted for crimes against humanity by the Hague’s International Criminal Court. Among the six were Uhuru Kenyatta and William Ruto. The two would deal with their cases successfully at the Netherlands based court and form a political alliance that won the 2013 Presidential election with Uhuru Kenyatta as President and William Ruto, his deputy.

They stuck together and won the 2017 Presidential election. During the 2017 general election campaigns, President severally told various political rallies that after his ten years term, they should support his deputy for ten years so that the deputy can complete unfinished programs.

A few months after the 2017 general election, President Kenyatta and Raila Odinga came together and vowed to work together to end divisive politics, corruption, marginalisation among other challenges facing Kenya. Their surprise union popularly known as the Handshake gave birth to the Building Bridges Initiative-an initiative aimed at uniting Kenyans.

Deputy president’s allies read mischief and were uncomfortable with the move terming it as a plot by the Raila led the opposition and some insiders in the Presidency to scuttle Dr. Ruto’s 2022 Presidential bid. This led to division, confusion, and disquiet in the Jubilee Party; Mr. Odinga enjoyed state privileges, yet his role in government was not clarified. The deputy president’s camp was disgruntled with this move.

In conclusion, whether President Kenyatta will support his deputy in the latter’s 2022 presidential bid remains unclear and unknown. In politics, one can never be too sure. Nothing is automatic, and nothing is given on a silver platter.

Governor Lonyangapuo agrees to perform on Churchill Show on one condition