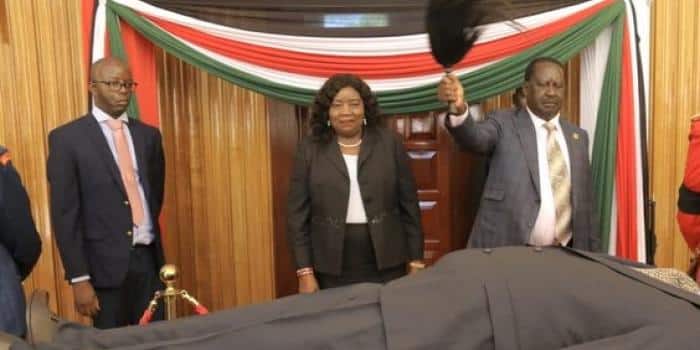 Odinga, who had been attending an African Union (AU) summit in Addis Ababa, Ethiopia which concluded on Sunday, February 9, paid his last respects to Moi alongside other opposition leaders including Senate minority leader James Orengo.

As he stepped into the gallery, Odinga held his dark fly-whisk over the body for a moment before waving it back and forth several times.

The ritual was made famous by his father, Jaramogi Oginga Odinga, during the viewing of the body of Kenya’s founding President Mzee Jomo Kenyatta.

Odinga undertook the ritual that has been immortalised on video (see end of story) in 1978 after Kenyatta died in his sleep.

As he waved his fly-whisk, the senior Oginga could be heard chanting various words.

In an interview with NTV Consulting editor Joseph Warungu, Raila disclosed that, at that moment, Oginga was mourning his longtime friend despite them having fallen out after independence in 1963.

After he viewed Moi’s body, Raila spent some time talking to the former President’s sons, Raymond and Gideon.

Addressing reporters after the meeting with Moi’s family, Raila described Moi as a freedom fighter as he noted the historical ties between their two families.

“Mzee was a freedom fighter. He and my late father were among the first Africans to be nominated to Legco (Legislative Council) in 1947. I’ve known him for a long time and he’s done a lot of things for this country,” he stated.

Word of the Day:The Importance of Planning