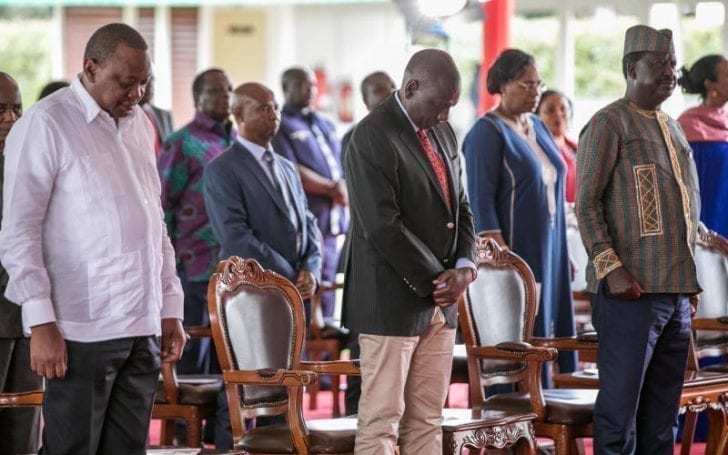 The ‘stopping of reggae’ aside, coronavirus menace is eating into the last of what is left of the political bromance between Deputy President William Ruto and President Uhuru Kenyatta.

By the time it landed last week, the political air was afoul, and the relationship between the country’s top politicians was tumbling fast. Ruto had just accused Kenyatta administration insiders, aptly called the system, of planning ills against him.

And when it came to coronavirus response, and despite — in his own words — being the President’s prime ground trooper, the DP appears isolated.

A newcomer in Cabinet, Health’s Mutahi Kagwe, has taken full charge as the face of government in the fight against the scourge and appears to have full blessings of the President.

On the day the National Security Committee (NSC) was meeting to announce the arrival of Covid-19, the DP was missing. And while government functionaries immediately stood down their planned events, the DP was left to hold his church event in Eldoret.

The DP also missed Day Two events on coronavirus when the President and his Cabinet addressed the country at the steps of his office, announcing a raft of measures to contain the scourge. When his troops attempted to place him at the centre of the fight, the government pulled an axe against them, the whole lot of them.

Then on Wednesday, the Public Service Commission (PSC), at the request of Interior cabinet Secretary Fred Matiang’i, declared redundant five positions occupied by his apologists, key among them his digital warrior Dennis Itumbi.

“This is to inform you that following consideration of your request, the PSC has, pursuant to Section 28 of the PSC Act of 2017 abolished the under-listed offices upon re-organisation of government,” PSC wrote on Wednesday this week.

Despite the humiliation, the following day, the DP showed up at State House for a Cabinet meeting where the coronavirus pandemic featured prominently.A photo of the DP sitting at the Cabinet meeting mysteriously disappeared from the official State House site.

“Ruto is being isolated by a cabal of people scared of what future portends for them once he ascends to power. They are cowards who will stop at nothing to stop the DP but, systems do not vote and they will have no influence in 2022,” Kikuyu MP Kamau Ichung’wa told Sunday Standard.Ichung’wa says Ruto’s absence from key events or meetings was because he had not been invited.

“One only attends meetings or events that he has been invited or notified. He is extremely respectful to the President and would not fail to avail himself if Uhuru invites him for a meeting. It is not clear if those invites have been coming,” said Kikuyu MP.
Mathira MP Rigathi Gachagua, also a key ally of the DP, claims the machinations at the top are not affecting Ruto at all and are instead helping him politically. Everyone wants a piece of Ruto, he says.

“For a politician, the worst isolation is that by the people. As far as we know, Ruto is a darling of the mwananchi and every one from women to youth groups, boda boda operators to churches and common men are all seeking his attention,” said Rigathi.

But the DP’s opponents say he has brought it all on himself, and that it is because of his abdication that the President has birthed new political forces like Matiang’i and Kagwe. Ideally, they say, a politically prudent DP would be on the front-line fighting that which threatens the country he hopes to lead.

“How will he claim to be isolated when he is the one fighting the same system he is in? It appears he no longer believes in the same government, he has simply isolated himself and wants to blame others for the same,” said Cherang’any MP Joshua Kutuny.

He claimed that the DP no longer respects the President and had created his own parallel centre of power while at the same time campaigning for 2022 and botching Uhuru’s legacy projects — the big four agenda and the building Bridges Initatiave.

His Tiaty counterpart William Kamket said the DP had failed the loyalty test and was now paying for transgressions. “When you lose favour with your boss because of loyalty problems, its your problem. Ruto is his own enemy,” said Kamket.

Analysts also say the coronavirus could not have come at a worse time for the DP.
At the burial of slain police officer Kipyegon Kenei in Nakuru, an officer working in his office, the DP launched a stinging attack on the government he co-presides.

Sergent Kenei, who worked as the chief security officer at the DP’s office at Harambee House Annex, was found dead in his house in Imara Daima, Nairobi on February 20 with a single bullet wound in the head.

“They have killed Kenei because he is the one who would have told the truth about the person who brought the foreigners and fake generals to my office. Those executing this scheme to stop me are using all means. I want to tell them that they may have the system, the support and everything, but we have God and the life of this innocent Kenyan will not go in vain,” said Ruto.

Nandi Senator Samson Cherargei said it was good the enemies of Ruto were coming out and showing all their arsenal. He said the incoming of Raila in the fold was the beginning of their problems and now they were fighting themselves in Jubilee thanks to opposition leader’s political machinations“We told Uhuru that the entry of the ODM leader into Jubilee, will leave the party broken because he was not coming to the handshake withclean hands, now see what has happened, our premonition has come to pass,” said Cherargei.

Cancer in Kenya Should Not Be A Death Certificate