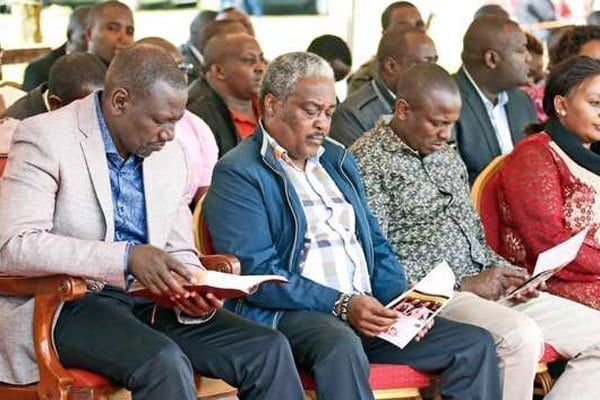 The stage is set for a political showdown in the wake of revelations of a plan to impeach Deputy President William Ruto.

Senate Minority Leader James Orengo stirred a hornet’s nest when he announced that in the next two weeks, he will sponsor an impeachment motion against Mr Ruto on the fake Sh40 billion arms deal and the killing of a police officer.

“Watch this space. In two weeks, we will start the process that will see us deal with him,” Mr Orengo said in Siaya on Saturday during the burial of University of Nairobi don Gilbert Ogutu.

The DP should reveal what he knows about the killing of policeman Kipyegon Kenei, he said.

Kenei’s mysterious murder lies in his passport,not the…

The call has triggered a furious response from Mr Ruto’s allies who challenged ODM leader Raila Odinga and his allies to make good their threat, promising to shoot it down.

On Sunday, questions emerged on whether ODM and MPs allied to President Kenyatta, commonly referred to as Kieleweke, have the numbers to execute the move.

Similarly, there were questions on whether DP Ruto’s conduct in recent days sufficiently meets the threshold of misconduct that warrants his removal from office in line with the Constitution.

Legal scholar Wamuti Ndegwa said that it is right and proper for an impeachment motion to be brought against the DP because the entire process is political.

“The process of impeachment is a political and not a legal one,” Dr Wamuti said, adding: “Let’s just say it is just enough to remove you from office if I don’t like your face.”

Dr Wamuti said that while the language of impeachment is couched in legal terms and even grounds for the same detailed in law, at the end of it all, politics plays a greater role.

“It’s not like a legal process where evidence is submitted and examined whether it satisfies the requirements of the law. It all boils down to politics.”

Lawyer Vincent Lempaa argues that there is nothing to suggest the DP has grossly violated the Constitution to warrant his impeachment. Those planning his removal are off the mark, he says.

“The grounds for impeachment are well detailed in the Constitution, but there is nothing to suggest the DP’s conduct meets the threshold of gross misconduct. He has not behaved in a way that brings dishonour to his office,” he said, adding that the mover of the motion will have to show that the DP has grossly violated the Constitution and the law.

The lawyer cautioned the proponents of such a motion that they should tread carefully “knowing that it could be worse for them if they don’t succeed.”

The Ruto-allied MPs told the Nation that from the onset of the truce between Mr Odinga and President Kenyatta, they knew the former premier and his team were out to scuttle DP Ruto’s State House journey.

Speaking on Sunday at Namgoi Secondary School in his county, Nandi Governor Stephen Sang led the region’s leaders in declaring they will not accept the DP to be disrespected.

Mr Orengo’s revelation, made in the presence of Mr Odinga, comes in the wake of a similar scheme in January, but which was suspended after the death of former President Daniel Moi. At the time, MPs allied to President Kenyatta had organised a retreat whose aim was to explore the possibility of bringing an impeachment motion against the DP.

The meeting would have been held on Saturday, February 8 at the Mount Kenya Safari Club in Nanyuki, but it was suspended after Moi’s death on February 4.

It is not clear whether Mr Orengo’s threats have any echoes of what would have been discussed at the February 8 retreat. The Nation was unable to reach Mr Orengo throughout Sunday.

An MP allied to the Kieleweke faction, and who did not want to be named, said there is an increasing concern over the DP’s conduct, especially through acts of open insubordination of the President and his audacity to contradict government policy.

The DP’s decision to attack DCI boss George Kinoti has only worsened an already polarised relationship, creating an impression that the DP is engaged in a shadow-boxing contest with his boss, President Kenyatta.

The DP’s office has been in sharp focus after former Sports CS Rashid Echesa was arrested while preparing to sign a fake Sh40 billion arms deal with some Polish arms dealers.

Mr Echesa had taken the dealers into the DP’s office in an act that has puzzled investigators and which is subject to high-level investigations.

It was after this incident that Mr Kenei, a police officer designated to guard the DP’s office, was later killed before he could record a statement with the DCI.

During Kenei’s burial on Saturday, the DP said the arms scam and the murder were part of an elaborate scheme to ruin his political career.

Nominated MP Godfrey Osotsi said the DP was setting himself up for impeachment.

“It’s clear he has lost faith in the government he serves. DP Ruto took an oath of office to protect and defend the Constitution, but his pronouncements in recent times violate these very principles,” he said.

National Assembly Minority Leader John Mbadi said Mr Orengo is calling out the DP to offer accountability to Kenyans. He cautioned Dr Ruto against inciting his community on claims that his life is in danger.

“He holds office in trust for the people of Kenya and should, therefore, explain what goes on in that office. He should stop diverting attention and appealing to emotions and account for the criminal activities taking place in his office.”

Soy MP Caleb Kositany laughed off the impeachment plot. He argued that the DP Ruto team has the numbers in the National Assembly to shoot down such a motion.

“Any kind of impeachment needs a two-thirds majority vote and, as things stand now, they cannot meet such a threshold,” said Mr Kositany, who is Jubilee Party’s deputy secretary-general.