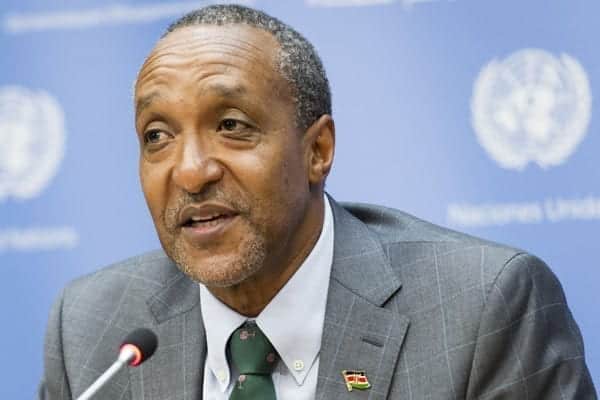 At least 18 Kenyans have died of Covid-19 abroad, the government has said.

On Tuesday, Foreign Affairs Principal Secretary Ambassador Macharia Kamau said that most of the deaths had occurred in the US, with the majority of the deaths occurring in New York and Boston.

Speaking on Inooro FM, the PS reiterated that the Kenyan government will not bring the deceased home due to the costs involved.

The PS said families willing to bring home the bodies of their relatives will have to bear the costs.

Alternatively, they can allow them to be cremated in foreign countries.

Family of Tom Opiyo Devastated After loss of Dream Job…

The number of Covid-19 fatalities abroad is slightly higher compared to the 13 who have died in Kenya.

The 18 fatalities are among 85 Kenyans who had have tested positive of Covid-19 abroad.

According to the PS, 60 of those who had been infected have recovered except one who is still hospitalised at a Sweden hospital in a critical condition.

Reported across the world

The US leads in the number of Covid-19 cases reported across the world with over one million cases and 56,803 deaths as of Tuesday, April 28.

At the same time, Mr Kama said Kenyans stranded in China, the UK and India will be evacuated as plans to get them out get underway, but at their own cost.

He said that some 500 Kenyans are scheduled to be airlifted back to the country from next week.

The exercise, set to kick off on Tuesday, will see 300 Kenyans from China and 200 others in India airlifted back home by the national flag carrier, Kenya Airways.

“Most Kenyans who were left stranded in India had travelled for medical treatment,” the PS noted.

The flight from China is scheduled to arrive on Friday next week.

The Kenyan High Commissioner to the UK Manoah Esipisu has advised those willing to board the flight to book their tickets well in advance through the Kenya Airways portal.