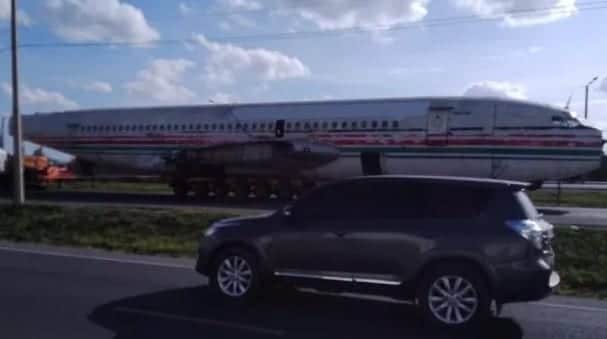 A passenger plane attracted varying opinions from a section of Kenyans after it was spotted being transported on a Kenyan Road.

According to videos that surfaced online on Sunday, April 5, the fuselage of a Boeing plane was spotted being transported at the back of a haulier truck along a highway in Kenya.

Many people took to social media to joke about how Covid-19 pandemic had adversely affected the aviation industry forcing pilots to ‘work from home.’

Speaking to Kenyans.co.ke, however, a representative from Kenya Airports Authority (KAA) suspected that the fuselage was from a Kenya Airways (KQ) hangers. 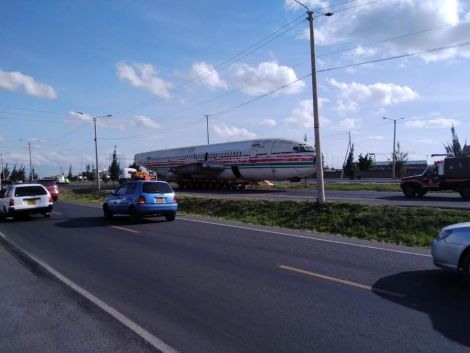 An airplane fuselage being transported along a highway in Kenya.

When we contacted KQ, however, a representative denied the claims explaining that an aeroplane, even if faulty, was by law not allowed to use the road as a means of transport and the branding on the plane did not belong to KQ.

The body of the plane in the video is coloured with two red green and two lines running across from the front to the rear.

“A plane can never ever use the highway. Kenya Civil Aviation Authority (KCAA) can never allow that to happen. it is totally illegal to do that,” stated the representative.

“Planes usually operate in a controlled environment and that whole space is called the air site. Even if the plane is damaged that it cannot move, they had rather break it apart and transport it through cargo,” he added.

The fuselage was spotted at a highway near Kitengela but it was not clear where it was headed.

Kenyans, in their cheeky nature, blamed coronavirus for the issue with some already building castles on how they would turn the fuselage into a dreamy restaurant.

“Why do I have a feeling it shall be converted into a club somewhere in Lang’ata,” quipped Tony Gachocki.

“That’s a New Hotel coming up in Kitengela. It will have a bar, lounge and conference facility,” chimed in Longton Jamil.