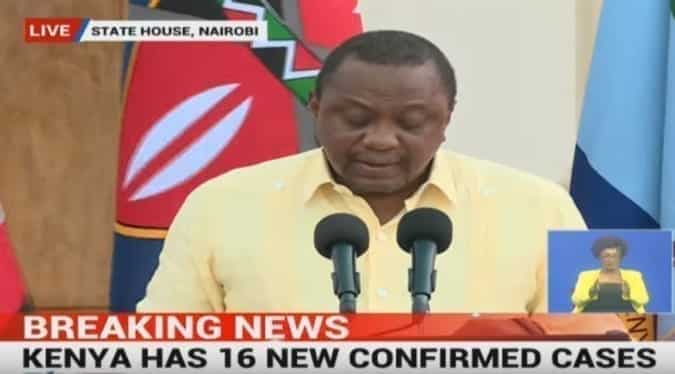 President Uhuru Kenyatta on Monday, April 6, announced that confirmed cases of Covid-19 in Kenya had risen to 158.

16 new cases were confirmed by the President at a press briefing held at State House, Nairobi.

The president also confirmed two more deaths as a result of Covid-19, bringing the total number of confirmed fatalities to 6.

He went on to announce several new measures to be implemented in a bid to curb the spread of the pandemic.

Observing that a majority of confirmed cases were in Nairobi, Kilifi, Mombasa and Kwale counties, Uhuru announced far-reaching travel restrictions in the four counties to curb the spread of Covid-19.

“There shall be cessation of all movement by road, rail or air in and out of the Nairobi metropolitan area and the counties of Kilifi, Kwale and Mombasa,” he asserted.

Uhuru revealed that the decision was taken following a meeting of the National Security Council.

“I issue these enhanced measures well aware that they will inconvenience many Kenyans. However, not doing so will lead to even greater suffering for Kenyans,” Uhuru announced.

The president further ordered that Ksh2 billion seized from proceeds of corruption be channeled by the National Treasury to support the most vulnerable members of society.

“Our war on corruption continues to bear fruits. As we scale up our intervention to this pandemic I have directed the National Treasury to use 2 Billion of recovered corruption proceeds in supporting the most vulnerable in our society,” he stated.

Those expected to benefit from the funds include the elderly, orphans and the disabled as well as residents in informal settlements in urban areas.

The funds are supposed to enable those considered most vulnerable to access food and other essential items during the pandemic.

To cushion the arts industry, President Kenyatta announced that a framework had been formulated by the Ministry of ICT in collaboration with Collective Management Organizations (CMOs) to ensure artists draw higher royalties.

He announced that in line with a pledge he made in January, royalties payments worth about Ksh200 million a month would be disbursed beginning ‘this week’ in line with the new framework.

It is expected that at least Ksh2 billion will paid out to artists in royalties annually after implementation of the new framework.

The president also directed the Ministry of Sports, Culture and Heritage to allocate Ksh100 million from the Sports Fund to support actors and artists during the pandemic.

Uhuru took time to commend landlord who had offered rent waivers to tenants during the difficult Covid-19 period.

He advised others who had not yet done so to follow suit, reiterating the importance of Kenyans working together and displaying resilience during the crisis.

“Fellow Kenyans. make no mistake, we are at war and we will win this war if we stick together,” Uhuru maintained.

The president vowed that the government would not relent in its fight against the virus, emphasizing the global magnitude of the pandemic.

“I will go to any lawful lengths to respond to the Coronavirus,”  he asserted.