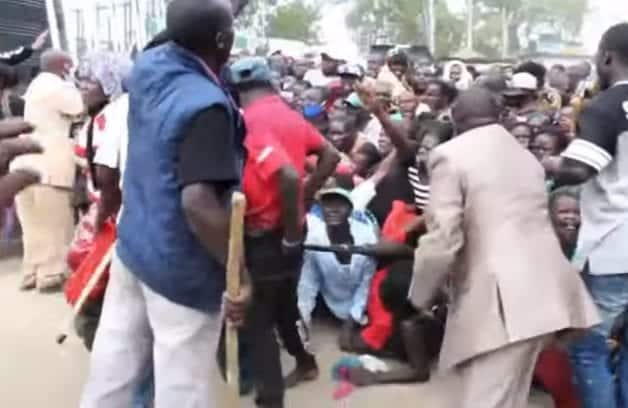 Police lobbed teargas to disperse Kibra residents who had turned out in large numbers to scramble for Raila Odinga’s donation, leaving many injured.

Chaos erupted at Kibra as hundreds of people tried to force their way into the District Commissioner’s office to get a share of Raila’s donation.

On Thursday, April 9, the ODM leader, his wife Ida Odinga among other sponsors donated a consignment, which included food, sanitizer, soap, oil and water, through the national government.

The hundreds who had flocked the DC’s office appeared to throw caution to the wind over the government’s directive on social distancing.

Police were forced to lob teargas in order to disperse residents who were trying to force their way into the premises.

Many were left injured especially those close to the gate as they were pushed from behind with everybody trying to get access to the DC’s office.

Some of the residents raised questions about social distancing not being observed, “We are endangering our lives because we are so close to each other.

“They had ordered a one-meter distance between one person and the other but it is not possible because people are pushing each other from all directions.

“That is how Corona could infect us. Were they bringing us food or they were trying to finish us?”

An old man explained what had led to the chaos, “What was wrong is that we were all called and the food is locked inside while we are all waiting outside.

“We were told to maintain social distance but it was not being observed. It was like we were called got get the disease.”

In an interview on Friday, April 10, Raila revealed that the donation he gave to the people of Kibra was as a result of him talking to his friends to donate.

Kenya’s history that you did not know