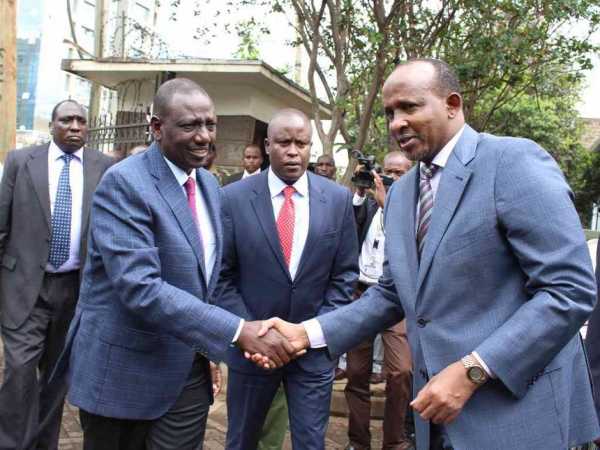 Majority Whip Benjamin Washiali and Deputy Whip Cecily Mbarire, however, were not so lucky as their proposed removal was endorsed by lawmakers.

Notably, Deputy President William Ruto whose allies have been targeted in the purge attended the meeting, alongside about 203 legislators.

While the looming purge had seen Washiali accept his fate, whether Duale would be spared had been the subject of debate due to his stature and track record in the house despite his affiliation with the Deputy President.

It remains to be seen whether Chairs of various committees such as Budget and Appropriations Committee Chair Kimani Ichung’wah, a vocal supporter of the DP, will be the next victims in the continued re-arrangement.

The President made no secret of his intention to ensure leaders in key positions are on the same page as him, acknowledging in an interview that he had little time left to cement a legacy before the end of his term in 2022.

Various lawmakers elected on Jubilee Party tickets had pledged their support for the President ahead of the Tuesday morning meeting, among them Bahati MP Kimani Ngunjiri who reiterated his commitment to Jubilee despite his remarks on internal wrangles.

“We have no otherwise but to attend [the meeting] as Jubilee party members,” Ngunjiri stated at a press conference alongside other Jubilee leaders from Nakuru on May 2.

The removal of Washiali and Mbarire followed a similar script to the purge that started in the Senate with the ejection of former Majority Leader Kipchumba Murkomen and Whip Susan Kihika.

It came in the wake of a post-election coalition agreement signed between Jubilee Party and the Kenya African National Union (KANU) which shored up the numbers in support of Uhuru’s agenda in the house.

The replacement of Murkomen and Kihika was followed by the removal of allies of the Deputy President from committee leadership positions, with fiery Nandi Senator Samson Cherargei among the casualties as he was removed as Chairman of the Justice and Legal Affairs Committee (JLAC).

Senators who missed the State House meeting, such as Nominated Senators Millicent Omanga and Victor Prengei, were also summoned to appear before the Jubilee Party disciplinary committee where they were grilled on their loyalty to the party.