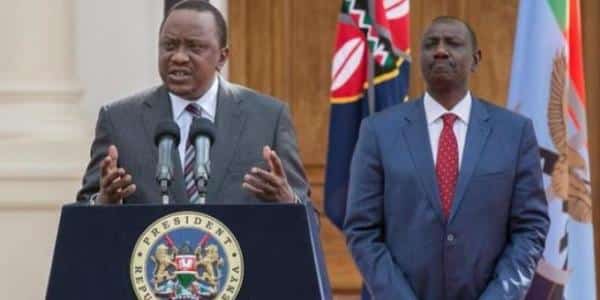 By making subtle changes within the structure of government, including the name of his office from The Presidency to the Executive Office of the President, President Uhuru Kenyatta has left many confused on the hidden political agenda.

Executive Order No. 1 of 2020 issued Wednesday evening caused a stir with some commentators interpreting the changes to mean the Deputy President’s office had been downgraded and tucked under the Executive Office of the President.

But some constitutional lawyers said nothing has changed, explaining the order as a mere regularisation of changes in government.

In the reorganisation, the National Development Implementation and Communication Committee, headed by Dr Fred Matiang’i is not listed as one of the functions of the Interior ministry. Instead, a new role designated as Oversight and Co-ordination in delivery of National Priorities and Flagship Programmes has been created.

Whether the creation of the Cabinet as an institution under OP will lead to power shifts is not clear.

In the previous order, the Cabinet did not exist under institutions and was only listed as a function within the Presidency. It now means that President Kenyatta will have to appoint a substantive Secretary to the Cabinet, a position that is highly regarded within the government.

With the ongoing shifts in the political arena, whoever gets the seat will assume a superior position. The position was scrapped after President Kenyatta’s attempt to appoint Monica Juma into the seat hit a snag when he failed to get parliamentary approval in 2015.

By renaming the Presidency, the President also appeared to whittle down some of the glamour that comes with a presidential system – perhaps in preparation for the constitutional changes proposed under the Building Bridges Initiative.

With this arrangement, DP William Ruto does not get any portfolio, and has to wait to be assigned duties. While he did not appoint his own staff, and his accounting officer was the State House Comptroller, Dr Ruto appears not to have lost anything other than glamour.

Also now within the Office of the President is the Nairobi Metropolitan Services (NMS) headed by Major General Mohamed Badi.

The NMS will now draw its funding from the Consolidated Funds Services (CFS), according to the new order. The order of January 14, and revised last month, thus gives NMS legal backing.

Without a legal instrument, the legitimacy of NMS has always been a subject of discussion with opinion among MPs divided whether it should draw funding from the CFS or the County Revenue Fund (CRF).

The PO shall also now be in charge of parliamentary liaison as well as co-ordination of constitutional commissions. The latter is likely to raise eyebrows considering that the commissions are supposed to be independent from the other arms of government.

In February, State House brokered a deal with Nairobi City County that saw the national government take over key functions from the devolved unit. Planning and management, transport, public works, health and ancillary services were transferred in the deal, which became effective on March 15. However, the NMS ran into headwinds in executing its functions after Governor Mike Sonko declined to sign the County’s Supplementary Appropriation Bill, 2020, effectively locking out of the Sh15 billion to implement the functions.

To save the NMS from a financial crisis, the national government allocated it Sh1.5 billion in the Supplementary Budget II approved by the National Assembly in April. In the 2020/21 budget estimates, the National Treasury has allocated NMS Sh27.9 billion.

This week, President Kenyatta and former Prime Minister Raila Odinga were sighted in Nairobi, at night inspecting the work being carried out by the NMS. The NMS is one of the projects that the President is updated on daily.

Why an executive order that was issued on May 11 was released Wednesday remains baffling.

Gone So Soon: Death Announcement for Violet Kamau of South Bend IN