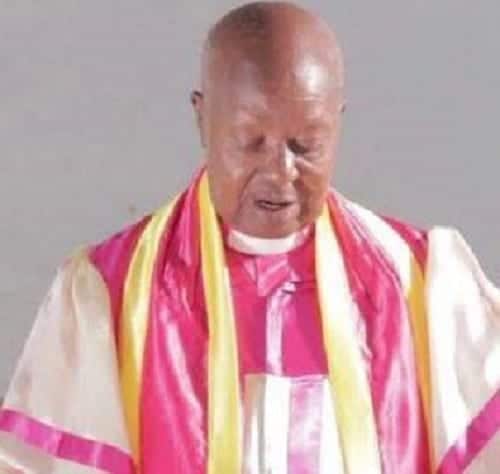 Controversial archbishop and founder of the Church of God Byrum Makokha has lost his life aged 91 years.

The Church of God of East Africa marks the end of an era after the death of its leader Rev Byrum Makokha. Makokha at Aga Khan Hospital in Kisumu undergoing medication after a long illness.

He was admitted to the ICU three weeks ago and his family and church posted an appeal for medical assistance from its members and the public.

Rev. James Obunde, the Deputy Archbishop in charge of Administration in a phone interview on Tuesday confirmed that  Bishop Makokha had died but more information about his death would be made public on Wednesday at around 2 pm.

“For now we will not address the media until tomorrow in the afternoon when we shall give a statement over his death,” said Rev. Obunde.

The church has its headquarters at Kima, Emuhaya Constituency in Vihiga County and boasts of over 800,000 followers.

It helped in establishing schools in the Western region such as Bunyore Girls, Mwihila Boys and Emusire amongst other major learning institutions.

Bishop Makokha once led the National Council of Churches in Kenya (NCCK) as the chairman between 1985 to 1988.

According to his rural neighbour, James Libulele, Makokha has not only been a pillar in his church but also to the entire community.

“He has been the man behind the church with the majority following in the area which made him very famous. I remember him since 1952 when my sister got married and he officiated the marriage,” he said.

Political leaders led by ODM leader Raila Odinga eulogised Bishop Makokha as an astute leader who oversaw the monumental growth of Church of God across the East African region.

“My condolences go out to the family of Bishop Byrum Makokha and the congregation of the Church of God of East Africa. The church has lost an astute leader who ministered to many and oversaw its monumental growth. May God comforts his family and friends during this difficult moment,” ODM leader Raila Odinga posted on his Twitter account.

Kakamega Governor Wycliffe Oparanya said death had robbed him a great friend who he visited recently to be blessed, saying he knew Bishop Makokha not only as the head of the Church which he (Oparanya) was baptised in at aged 10 but also as his close friend.

“He was a very inspiring church leader whom other leaders should emulate from. I visited him last month and he was jovial in giving me a long history of the church, little did I know those were his last words to me,” said Governor Oparanya.

“Today we have lost a shepherd of the flock, a leader and advisor to many; Arch. Bishop Byrum Makokha of the Church of God (EA). I convey my deepest condolences to his family and the Church of God (EA) family for the bishop’s demise. He fought the good fight, he finished the race, he kept the faith” said Vihiga Governor Dr Wilber Ottichilo

In 2000, Dr Makokha made headlines when violence exploded at the Buruburu branch of his mission. Later, worshiper Paul Etemesi and  11 others sued the Executive Council Church of God in East Africa of their own behalf and on behalf of the members of the Local Congregation of Buruburu Community Centre of the church.