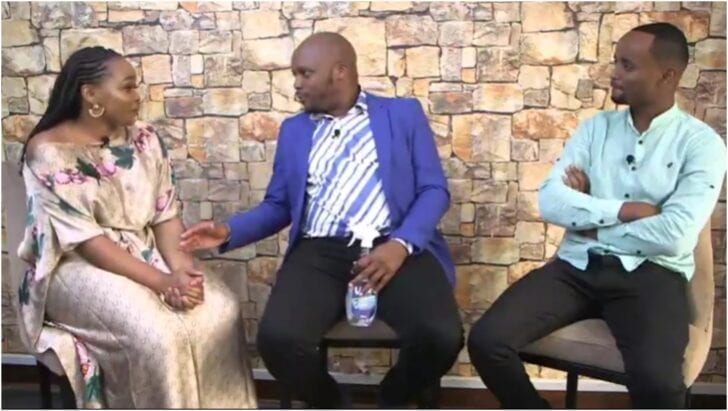 Before Milly WaJesus met Kabi, he was a known alcoholic and drug addict who was at the time a ladies’ man and not into Jesus.

That was before 2013, before he crossed paths with his now significant other, Milly while she was still in highschool. Telling the story on BonganaJalas, the beauty influencer who was at the time in Form 2 was already dating a young man.

Milly was living with her parents in Dandora before the completion of their house that called for a grand opening and Kabi, who had already completed his highschool and now into filming, had been called upon to capture the moments and that is how the two locked eyes for the first time.

Shocked by how young these two met, Jalang’o posed to Milly;

You are in Form Two and he has finished, so was he sending you letters or what?

Milly, unexpecting of the query admitted it was a long story but she was going to tell it as it is. Turns out that Kabi and Milly’s boyfriend were best of friends, who now introduced Kabi and Milly to each other unknowing just how much it would cost him in the end.

Feeling uncomfortable by the chat, Kabi threatened to leave the interview, standing up and almost walking away, bashing Jalang’o for digressing in what was supposed to be a more indulgent interview.

“We already discussed what we were going to talk about and this was not it!” Kabi WaJesus slammed.

Shocked by Kabi’s anger, Jalang’o asked the singer and content creator to humble himself and let his wife speak. According to Milly, her boyfriend is the one who recommended Kabi as a good photographer during her parents’ housewarming party.

The interview continued but it got pretty uncomfortable for a dear Kabi to listen to his wife talk about her ex-boyfriend instead of him.

Panic after four bodies are dumped in river beds in Machakos

State might bar Kenyans from taking up jobs in Saudi Arabia