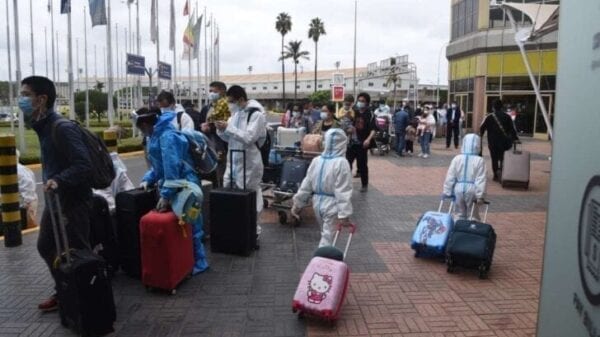 Kenya handled her first international flight Saturday since foreign flights were suspended in the wake of the coronavirus pandemic.

By Saturday 10am, five flights had departed the country.

The first flight, to Ethiopia, left the Jomo Kenyatta International Airport (JKIA) at 4.05am while the first to arrive in the country from Kigali, touched down at 11.30am.

“As we come back, we will be following traffic and demand. If demand picks up we will increase traffic and destinations and when it slows down we respond effectively,” said KQ Managing Director Allan Kilavuka.

Passengers also came back to a new airport environment, due to the measures that have been put in place including wearing of face masks all the time, observing social distance and carrying proof of being tested for Covid-19 before travel.

“We following the protocols because this is a matter of life and death,” said Manjeet Sembi who was travelling to London for a wedding.

Mr Sembi told Nation the wedding was supposed to happen on July 11 but was delayed to August 21 because of the lockdowns.

But even as KQ went back to the skies, it will not be flying to Tanzania following the escalation a diplomatic tiff that led Dar es Salaam to block flights from Kenya on Friday.

KQ had already planned a flight to Tanzania on Saturday, but the turn of events led to its cancellation.

But even as this happened, the government was still not revealing the true position of diplomatic relations between Kenya and Tanzania, with Foreign Affairs Chief Administrative Secretary (CAS) Ababu Namwamba insisting that all is well.

“There is absolutely no diplomatic issue between Kenya and Tanzania, we have a fantastic diplomatic relationship. We continue to engage continuously. There is engagement at the very highest level, between our two Heads of State, there is continued engagement between our foreign ministries in Nairobi and in Dares Salaam,” Mr Namwamba said.

But he could not explain whether with the “continuous negotiations” Kenya was informed of the decision by Tanzania prior, or it was caught by surprise. His statement, however, hinted that there could be a bone to pick.

Kenya Airways will be flying to 30 destinations, as the airline monitors the situation to decide where to increase or reduce frequencies and destinations.

Positive Thoughts:Don’t compare yourself with anyone