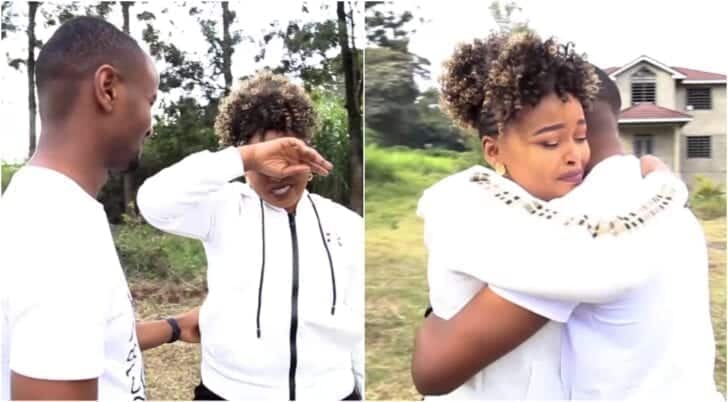 The WaJesus family is one couple that has proven marriage can still work, with the love flame still burning bright, promises living to be fulfilled and romance only getting sweeter by the day.

A couple that has become an envy to many but one that has lived to give hope to those looking forward to one or in despair that with God in it, it is very possible.

Milly was turning a year older yesterday and her romantic husband, Kabi spared his time to plan all through it and it emerged a beautiful success.

Blindfolded, Milly was driven to an undisclosed location, seemingly a rural kind of place, quiet, beautiful greenery, away from the city.

Once she was unmasked, what stood before her was a beautiful romantic picnic setup in what many would term the middle of nowhere but what stood out most was the certification Kabi was about to hand her.

The ground the couple had been standing in was a piece of land Milly had prayed to God about for so long, she knew they could not afford it but always trusted in God.

Finally, Kabi had made her dream come true on his wife’s special day, handing her a title deed, certified and with her names on it.

Overwhelmed, the mother of one, broke to tears, weeping uncontrollably, running around insanely and Kabi was just grateful he could make it happen.

For Kabi, his wife deserved everything good because since day one she believed in him, even when he had no vision, she stood by him and for that, he would give up everything for her.

Kabi used his last savings from his previous company to make his first step towards purchase of the land by 20th July, and worked day and night to fully ensure the land was in his wife’s name.

A piece of land they seek to settle in as their first home and for their family. It was a beautiful late afternoon, dancing, singing, crying, popping champagne, eating and drinking the evening away.