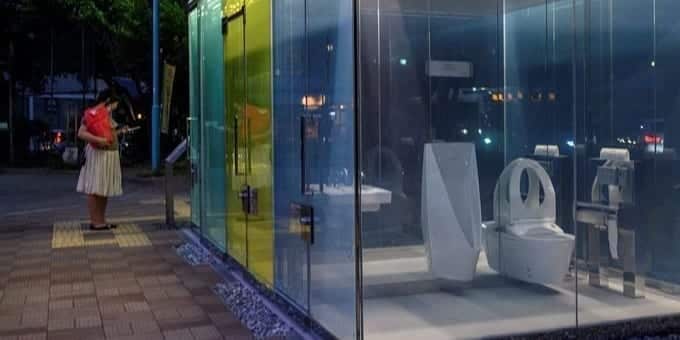 Spacious, clean, and almost completely see-through, an unusual new public toilet block has been built in a Tokyo park — but thankfully, the walls turn opaque when you lock the door.

When not in use, the three stylish units are translucent, with purple glass for men and pink for women, as well as an accessible yellow unit equipped for changing babies.

The walls are kept transparent by an electrical current running through them. Locking the door cuts the current, ensuring user privacy, and meaning that there’s no danger of all being revealed if there’s a sudden power cut.

The toilets are part of a project by the Nippon Foundation, a non-profit, which commissioned a series of prominent architects to rethink what public facilities might look like.

The transparent units in Yoyogi Fukamachi Mini Park are the work of architect Shigeru Ban, who wanted to tackle a couple of the biggest concerns people have about public toilets, said Nippon Foundation communications officer Kana Saji.

“By making the toilets transparent, we can alleviate people’s fears about their cleanliness, but also in terms of safety, because you can see that there’s no one hidden inside,” she said.

The concept appealed to at least one local resident, a 41-year-old housewife who said she liked how clean the facilities were, as public toilets are often “dark and dirty.”

And Masataka Tsuchigami, 55, another local resident, said he trusted the technology behind the transparent walls, and wasn’t worried they would suddenly turn see-through as he did his business.

“In the worst-case scenario, if that were to happen, it wouldn’t be that bad — we were all born naked!”

Culture Shock: The Evolved Nairobi Woman-Galloping From One Club To Another