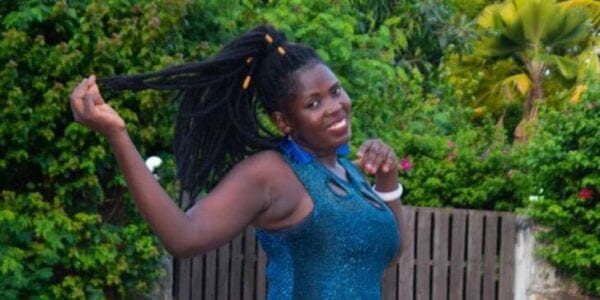 Kenyan artist Mercy Atis whose song recently went viral on social media reveals how she was deported from the US after serving a five-year jail sentence. Here below is her story:

“When I shared my latest song titled “I don’t wanna know” on Facebook and YouTube through my stage name Mercy Atis, I didn’t expect to go viral. First, because the decision to release the song was made on impulse. I chanced upon a producer who was willing to charge me Sh5,000 for the video.
I thought that was a fair deal and I was keen not to lose it. I did my make-up and wardrobe. I am a single mother of two breastfeeding children, who are three and one, and I didn’t have anybody to look after them so I tagged them along. With the kids around, there were many interruptions, and it took four days to complete the shoot.
Many quarters poked at my producer, my clothes, my body, and my makeup. But, the worst was reading thousands of comments from people saying that I couldn’t sing. For the past week, the song has been making rounds on various social media platforms and even getting played on some radio stations. As an upcoming artist, this should have made me happy.

However, the first two nights were tough. I couldn’t sleep as I wondered why people were being so mean to me. My life has been one knitted by strings of mistakes, one after the other. This was my second chance at life but many people won’t let me be.
You see in 2014 I was deported back to Kenya after serving jail time in the US. I returned aboard a military plane from California, the USA to Kenya dressed in a hospital gown. I was accompanied by eight people including a doctor and a therapist.
There were no signs that coming back, a deportee, will make my life better as I had no money or assets to my name. However, on my way home, I have one resolve— to make it as a musician.

Past life
How did I end up here? In 2005, I left Kenya on a student’s visa to the USA under sponsorship by a local church from my home county Kisumu. The plan was to market Christian books for the particular church and enroll in a nursing course. I trained as a Certified Nursing Assistant, got a certificate, and had even started the practice when my life crumbled. In 2009, I was arrested for arson and jailed for five years.
To board the flight back home, I was picked up from the immigration jail where I had spent another nine months, two months of these being on hunger strike.
When I came back home, I put up with a friend. Then, I was not on good terms with my family. Most of them didn’t want to be associated with me. But that’s in the past now. We are in a better place.

I hawked water in the city to eke a living and in the same year, I traveled to Kisumu, my home county where I reconnected with an old friend who operated a music recording studio. I had about 600 songs, all written while in incarceration. What do you do when you are arrested in a foreign country? No family visitations and you don’t know anybody? You start looking for solace. I turned to music.
He helped me record a few songs, which didn’t do well but at least they affirmed my aspirations of becoming an artist. I later moved to Malindi.
In between music, I did other menial jobs, started a YouTube channel, and opened a salon which I have had to close due to money woes caused by the ravaging Coronavirus. Currently, I’m trying my hand at online marketing. I had plans to release more music this year but I am cash strapped.

The release of the viral song has been timely. I have had many fake friends around me, some contributed to my arrest last year on claims of running an adult site, a matter I can’t delve further into because it’s still in court. The song was a message to them.
On YouTube alone, the song has more than 85k viewers. On Facebook, the comments section has been bulging.
The comments were disheartening. I perused through over 2,000 comments looking for one that would say, “your fashion sense is a fail. I can dress you. Or, I am volunteering to teach you how to apply makeup.” I found none of those. Even those that I responded to asking for help, slithered away.
I have taken note of some of the criticism. I am now working with a personal trainer to help me tone up and I will engage a professional makeup artist in the future.
I am already in the process of shooting another song whose release has been held back by financial constraints.
The five years I was jailed taught me to be brave and persevere. We were encouraged to start a new life for ourselves. What I wasn’t prepared for, is that sometimes, the same people calling for your change will be the same one mocking the process.”

Chinese and Kenyan wedding everyone is talking about