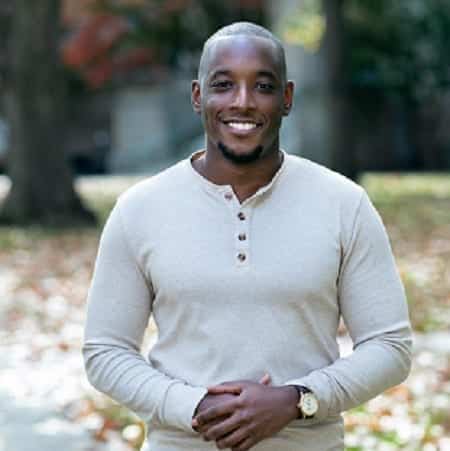 In pursuit of travel, adventure, and a way to challenge himself, Mtume Sangiewa ’23 enlisted in the U.S. Marines as soon as he graduated from high school in Orange, California. After training as a military police officer, he found himself with an extraordinary assignment: he was headed to Washington, D.C. to guard President Barack Obama ’91.

From 2011 to 2016, Sangiewa served with the U.S. Marines presidential security unit that protects the president when he is aboard the official presidential helicopter. Sangiewa has a number of photographs of himself in his formal “dress blues” uniform, snapping a sharp salute as President Obama descends onto the White House lawn from the helicopter. One of 13 Marines chosen for the prestigious assignment from among 200 candidates, Sangiewa completed 30 presidential security missions in eight countries. He led a quick-reaction force of four Marines who protected the presidential convoy on a trip to Israel and Palestine and accompanied Obama on the campaign trail in 2012.

For deeply personal reasons, Sangiewa’s most meaningful experience was accompanying President Obama to Nairobi, Kenya in 2015. In a striking parallel to President Obama, Sangiewa also has a father from Kenya who left his family behind in America and returned home when his son was very young. Sangiewa had not seen his father since he was four, and when it was announced that President Obama would be making an official visit to Kenya, Sangiewa requested to serve the detail. As thousands of Kenyans chanted President Obama’s name, Sangiewa found himself eagerly awaiting his reunion with his father.

Credit: Courtesy of Mtume SangiewaFrom 2011 to 2016, Mtume Sangiewa served with the U.S. Marines presidential security unit that protects the president when he is aboard the official presidential helicopter. He later spent three-and-a-half years on Marine security teams protecting American interests overseas.

“It was very defining for me,” recalls Sangiewa. “It opened up the door to that whole side of my family.” Sangiewa’s father explained that he returned to Kenya because of unresolved issues with his own father, and for Sangiewa, the reunion proved to be healing. The fact that he reconnected with his father on an official visit with a U.S. president whose father was also Kenyan “was definitely an interesting parallel,” he says.

In addition to protecting the president, the Marine security unit guarded the presidential helicopter around the clock, and it held dual responsibility with the Secret Service to protect the president during his visits to Andrews Air Force base during Air Force One operations. During his tenure on the unit, Sangiewa also supervised the training and development of more than 70 Marines in police and security skills including marksmanship, deadly force training, and defensive tactics.

“Looking back, it was an amazing experience,” says Sangiewa. Obama “was super nice but very presidential. Even in normal circumstances he’s very presidential. He didn’t turn it off.” Still, the president displayed a dry sense of humor, Sangiewa recalls. The first time Sangiewa was introduced to Obama, Sangiewa’s mother was invited for the occasion, too. “After saying something to my mom, he shook my hand and said to me, ‘I like your style.’” With a laugh, Sangiewa notes, “I was in my dress blues.”

The Marine Corps is very conservative and the university is very liberal, so coming from one side to the other is very interesting. In good ways and bad, you see the best and worst of both sides.

After leaving the presidential security unit in 2016, Sangiewa spent three-and-a-half years on Marine security teams protecting American interests overseas. He served on the security team at the U.S. consulate in Johannesburg, South Africa, and then on the security teams at the U.S. Embassies in New Delhi, India and San Jose, Costa Rica. With his presidential security experience, he brought best practices to his overseas posts and excelled at training Marines in security. In Costa Rica, he was promoted to deputy detachment commander of embassy security, where he was in charge of U.S. Marines serving the embassy.

The high point of his overseas posts was the volunteer work he did in all three places, he says, including teaching locals in New Delhi basic self-defense skills and doing environmental and beach clean-up in Costa Rica. “It all really influenced my opinion about locals,” he says. “It made me more open to people and to experiencing their cultures.”

Sangiewa earned his bachelor’s degree while in the Marines through an online program at Park University, from which he graduated with honors in 2018. After excelling at logic games he played for fun—and then learning they came from the LSAT—he decided to apply to law school. Sangiewa isn’t certain yet of his career path but is interested in intellectual property and international law, and he’s a
member of several HLS journals including the International Law Journal, the National Security Journal, and the Negotiation Law Review. About half of his 1L section is living in Cambridge, he says, and he and his section mates find ways to connect whether virtually or through small, socially distanced gatherings.”

His service in the Marines, he says, not only influenced his self-discipline and work ethic but more. “It informs my attitude about politics, about critical thinking. It helped develop my ability to see both sides and remain rather objective,” he says. “The Marine Corps is very conservative and the university is very liberal, so coming from one side to the other is very interesting. In good ways and bad, you see the best and worst of both sides. In the Marine Corps there’s a lot of racism and nationalism. On the other hand, here you have all-inclusivity but also the negative things that come with liberalism, such as restricting speech, that you can’t say certain things” because they may offend someone. “It’s very interesting to go from one world to the other.”