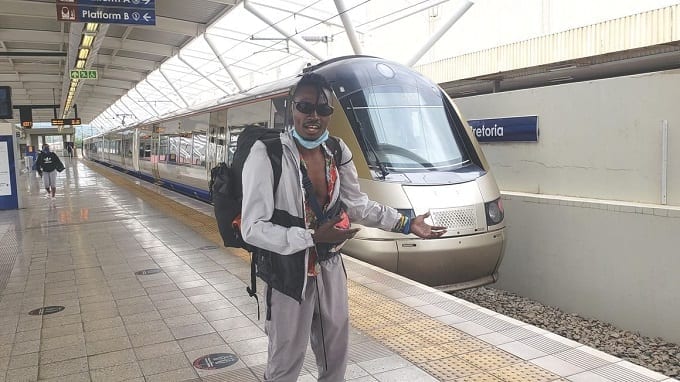 For six months, Fredrick Marwa was hopping from one island to another in the Philippines, wondering how he was ever getting back to Kenya.

When he first flew into the country, he did not expect borders to close, and full lockdown as soon as Covid-19 cases were reported.

Fredrick had flown to Manila in the Philippines from Cambodia in early March, together with his girlfriend.

The Philippines had just reported its first case of Covid-19. They breezed through the airport where only their passports were checked and temperature screened. The couple kept travelling normally but after a week they heard that flights would be cancelled.

Despite the looming border measures, they decided to travel further into the islands. The Philippines is made of about 7,641 islands.

They went to Palawan Island which is the most visited and tourist island located in the Western Philippines.

“The day we arrived in Palawan, things got worse. We were asked where we were staying and requested to fill forms. We stayed at an Airbnb for two days, then decided to drive to El Nido, a Philippine municipality on Palawan Island, where we were planning to stay for a week,” he says.

There were police checks everywhere.

“In the Philippines, there is something they call a barangay, which is the smallest administrative division. One island can have like 2,000 barangays. Moving from one place to another, you had to be checked at every barangay. Imagine how hectic it is to travel for 160 kilometres where you pass through several barangays,” he says. By the time it was communicated that it was necessary to fly home immediately, it was all a little too late.

Most airlines had already cancelled their flights, and the Philippines went on total lockdown.

Airbnb hosts cancelled bookings. Fredrick had to book a motel which only served breakfast. “We could not even leave the house. We were living 30 metres from the ocean but we would not swim. Everybody was afraid of tourists. Locals believed that the tourists had brought Covid-19,” he says.

The couple stayed in the self-contained room for four months. They could only go to the market to get food.

“Later on, we were allowed to walk in the morning and evening but not swim. It is one of the best islands but we couldn’t have fun,” he says.

As the restrictions were eased, he was able to travel to other places such as Angeles city and Tagaytay.

Tourists are drawn to the Philippines for its rich biodiversity, idyllic beaches and islands near mountains.

But now with few outdoor activities to do he spent time learning about the customs and way of life of the local people.

“They have a unique type of lifestyle. I was surprised that people live in boats,” he says.

One of the most memorable travel experiences, he says, was helping a Philippine family start a business during the pandemic.

“I met a man called Jan who lived under a bridge with his family in Angeles City. He took me to his home. I gave him money to start a fish business and his business is booming. The people there are poor but they will still invite you to their homes and treat you like family,” he says.

But how did a 29- year-old who was born and brought up in Isibania, Kenya end up stranded 9,354 kilometres away.

Frederick left home in 2016 for Colombia to work as an English tutor after graduating from Jomo Kenyatta University of Agriculture and Technology (Jkuat).

In Colombia, he started visiting places and posting videos online.

From there, he has travelled to 36 countries mostly in Africa, Central America, and Southeast Asia, and garnered more than 200,000 subscribers on YouTube.

Frederick Marwa in South Africa. He has travelled to over 30 countries in Africa. PHOTO | POOL

He was backpacking his way through Asia when Covid-19 struck.

He says Asia is one of the most exceptional continents from “crazy” street food to a sleeping bus.

On that bus, you can only sleep. There are no chairs, only beds and you do not choose who your bedmate will be, especially if you are a solo traveller.

Though he speaks Spanish, he says learning basic words and popular phrases in advance helps overcome the language barrier when travelling.

“I like to go to clubs and attend events. When I am out there I behave like I have lived in those areas for a long. Other times I stand out and people are curious about me. I make friends that way,” he says.

But behind the scenes, he says, even the well-travelled black people face unseen hurdles.

One of his hardest experiences was crossing the border from Laos to Cambodia. “We were 12 of us and everybody was granted entry except me. They said it is because I had an African passport. I was deported to Hong Kong yet I had my flight out and hotel already booked. In Mexico, people thought I was an illegal immigrant going to the US,” he says.

Passport privilege is a thing, he says.

“If you are a black American you are respected but if you are black from Africa people don’t respect you at all. People have to see how much money I have on me and in my bank account. I give a lot of information I am not supposed to give just because I have a Kenyan passport,” he says.

Despite its challenges, Fredrick is proud to be part of the many young black travellers living their best lives. At the moment he is in Isibania, riding out Covid-19 restrictions. He hopes to continue with his travels soon.

“My girlfriend and I plan to go to at least 30 countries in Africa. I don’t like to travel to expensive countries. I am a backpacker. I believe in simplicity and affordability. My viewers loved it when I was in countries like Laos, Cambodia, Colombia, and Mexico,” he says.

Diaspora Crisis: To Retire away from or back in the Village

Kenyan Diaspora Honored in Ireland for good work in the community