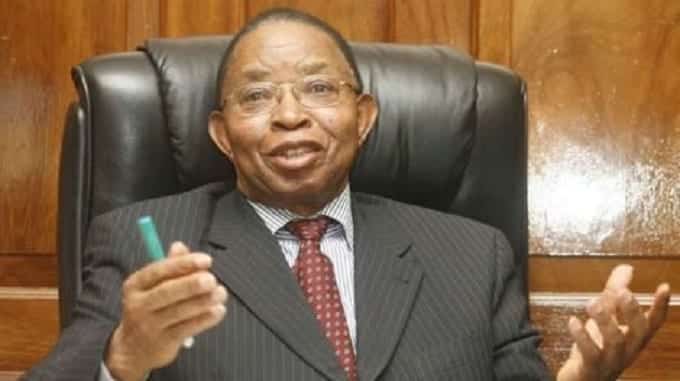 The late Evan Gicheru was Kenya’s Chief Justice for eight years having been appointed by former President Mwai Kibaki in 2003.

Chief Justice David Maraga eulogized him as a steadfast public servant, a selfless professional, and a humble human being.

“Justice Gicheru will forever be remembered for his role in entrenching judicial service independence in Kenya ending the time when Judiciary took instructions from the Executive,” he said in a statement.

He took over the helm of the court organization from former Chief Justice Bernard Chunga in 2003.

Before that, he had a long, career in public service that began when he was appointed a District Officer in Wajir.

Justice Gicheru was appointed a judge of the High Court of Kenya in 1982.

However, his public limelight cameo came when he was appointed to head the commission looking into the death of former Foreign Affairs Minister Robert Ouko in 1990.

At the time he was appointed to the office of CJ, the Judiciary was under the spotlight and the threshold of judicial reforms was on a scale not previously witnessed.

When he took over, Gicheru pledged to end the culture of missing files and delayed court cases.

He was in charge when there was radical surgery of the Judiciary that saw a half of the magistrates and a third of judges lose their jobs.

Famed for the rush swearing-in of President Kibaki after a controversial electoral victory in 2007, the dusk swearing-in ceremony remains one of the moments of his tenure as Chief Justice.

A section of lawyers had earlier wanted him to resign after the hurried swearing-in following the disputed 2007 presidential elections.

In 2014, the former chief justice hit the headlines again after he went missing while on holiday at the Aberdare Country Club in Nyeri County.

He was at the resort with his family when he went for a stroll in the expansive game reserve. Police mounted an overnight search and found him in a thicket in the club.

Police and the family said the former CJ was diabetic and he fell in a thicket as he wandered in there and slept.

His greatest challenge had been steering the Judiciary through unprecedented reforms and thereafter keeping abreast of contemporary best practices in the administration of justice.

A man with no regrets, as he proceeded to his car on the last day of his tenure, Gicheru reiterated that his conscience was clean and that he had done his job well.

He is survived by his wife and seven children.

Gambian woman appeals for help in search of her Kenyan mother

Dear Kenyans,It is not worth dying for ‘Kenyatta’ or ‘Odinga’

VIDEO:Here’s Why This Japanese Official Knelt Before Uhuru