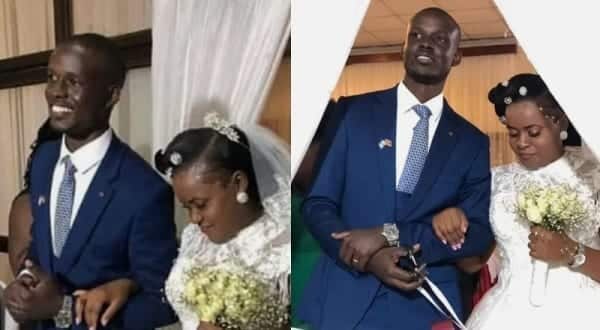 On the night of Sunday, December 6, the curtains fell on the one-day marriage between Roy Watuulo and Anita after the groom died just hours after their wedding.

The couple tied the knot at Thornycroft Chapel, Uganda Christian University (UCU) on Saturday, December 5, and a day later, Roy developed some breathing problems and would later die of a blood clot in his lung as his family revealed.

The pain the deceased’s one-day wife is going through is unimaginable and though she did not have the chance to relish her marriage to the love of her life, their loved-up pictures proved the couple had a unique chemistry.

The couple did not shy away from showing their chemistry to the world. Source: Facebook From their pictures, the love that Roy and Anita shared was so strong and real.

The duo did not hide their love to the world and moreover, it was easy to tell that Anita felt secured in her partner’s arms. According to family and friends who spoke to Daily Monitor, the couple had hoped to live together and have a wonderful long life.

“The couple hoped to live a long time together but God decides otherwise,” David Kandi, a friend of the family said.

Peter Mafabi, who said he was a close friend of the deceased recalled that Roy really enjoyed his wedding day on Saturday. His mother, Lydia Watuulo eulogised his son as a calm and humble man who had just returned from Israel where he was pursuing a Masters in Agro studies.

According to her, the Agronomist got a scholarship after scooping a First Class in his agronomy studies at the Uganda Christian University (UCG).

The lovers were both alumni of the university and the deceased man’s father, Richard Watuulo, is a dean in one of the departments.

The varsity also mourned the deceased and sent its condolence message to his family and wife.

“It is with deep sorrow that we announce the death of Roy Watuulo, a son to Dr. Richard Watuulo, the Dean Faculty of Education and Arts. Roy died this morning at 12 a.m. from Kapchorwa District,” the campus wrote on Monday, December 7.

THE PATHWAY TO UNIVERSITY STUDIES ABROAD

30,000 Kenyans to be hired for Railway Project

RAW VIDEO of Gunmen Stealing From Motorists in broad daylight