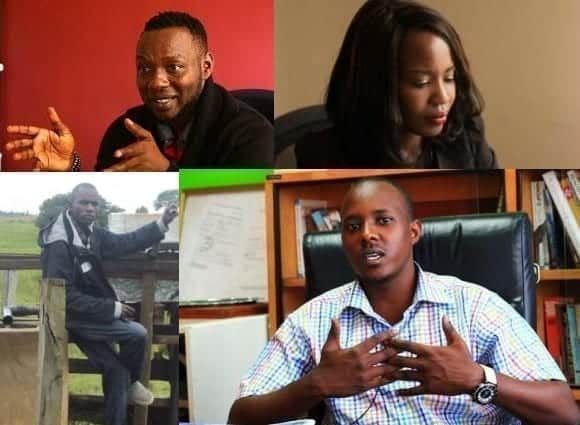 These five individuals have exhibited grit, persistence and good old hard work to rise from humble backgrounds to business moguls in their respective fields.

Their stories have inspired thousands to pursue their dreams regardless of personal circumstances that could hinder their progress.

Here’s a look at five business moguls that have left a significant mark in their respective industries.

His story reads more like fiction as the multi-millionaire actually started out as a hawker in the streets of Nairobi where dodging county council enforcement officers was the order of the day.

From Mitumba Hawker to Millionaire-Rags to Riches Story of…

When he was in Form Two, Juma dropped out of school due to lack of school fees. He was forced into hawking second-hand clothes in Nairobi.

“You wouldn’t know what hardships are until you’ve lived the life of a hawker. But I thank God because that job gave me a ‘street degree’, which is much more valuable than any formal education I’ve ever received,” he once explained during an interview.

He also revealed that despite the hardships, he was always thinking of ways of improving his life. One desire that burned in his heart was to own and run his own company.

Then he got an idea of starting an events company, which he registered under the name ‘Parrot Group’.

After years of grinding in the industry, Parrot won a contract to handle Orange Telkom’s branding during the promotion of the low-end ‘Kadunda’ mobile phone and the rest, as they say, is history.

Parrot Group has so far worked with several companies including M-Kopa, Telkom Kenya, Lenovo and CMC Motors among others. His company has an annual turnover of Ksh70 million with assets worth over Ksh40 million.

Imagine making Ksh50 million at the age of 19. Well, that’s how much Mwale made after selling his first company.

His big idea came when the energetic high school student was hospitalized with dysentery after drinking contaminated water.

As he lay in bed, he thought about how he would provide his community with access to safe drinking water which put him on the road to becoming one of Africa’s most promising young entrepreneurs.

Mwale invested his life savings, about Ksh10,000, in digging a basic borehole in his village.

The project was so successful that it provided clean water to around 500 households upon completion.

Within a matter of months he had founded Skydrop – a company that would come to specialize in capturing rainwater in a series of giant tanks before purifying and bottling it for sale on the commercial market.

Following the success of SkyDrop, he was named finalist at the Anzisha Prize walking away with Ksh3 million and admission to the African Leadership Academy in South Africa.

In 2013, he sold his 60 percent shareholding in SkyDrop to a group of Israeli investors for over Ksh50 million By that time SkyDrop was generating annual revenues of Ksh51.5 million with 74 employees.

Yet another student to make it to the list. Mahugu has often been regarded as an IT guru since her days at the University of Nairobi where she earned her  BSc. in computer science.

In 2010, she enrolled in a course in design thinking at Stanford University.

She is the founder of Soko, an e-commerce platform based in Kenya and San Francisco in the USA, which allows local artisans to sell handcrafted jewellery directly to the consumer.

Her idea was to promote direct trade between African designers and customers worldwide. She set her mind on building the platform despite limited resources driven by a dream and a passion to grow.

“I think the advice I’d give to a younger me, particularly five years ago, would be to just take a moment to smell the flowers.” she once told the BBC

“I think people get caught up in striving for success that they just forget to enjoy the simplicity of life,” she added.

Born in 1993, she is also the founder of WaziData and Chiswara.

The renowned philanthropist and multi-millionaire started out as a cashier at a hotel in Malindi before venturing out into the entrepreneurial space where he became a milk vendor.

“With a capital of Ksh20,000 I started buying milk from Kinoo and Kiambu and supplying city hotels both in Nairobi and Mombasa,” he recounted.

Things did not work well and he found himself working at a local bank only to get frustrated after two months.

Kinoti was brought up in a business-oriented family and it’s from this upbringing that he learnt the ropes of entrepreneurship.

“I started assisting my mother in her business while still in lower primary. At school I sold sweets from my father’s wholesale shop to the other pupils. At age of 10, I was the cashier at the shop.” he revealed during an interview.

He is the founder and CEO of Shade systems EA. ltd, a million-dollar enterprise that has a presence in over 6 countries. He is on the Board of several prominent East African companies.

The founder and owner of NRG Radio, Mo Sounds among other successful companies started out as a deejay.

Mulei’s determination and passion are reflected in the success Groove Awards has garnered. He started the company in 2004 for the sole purpose of promoting and rewarding the best gospel artists in East Africa.

His early life was not all rosy as he was raised by his grandparents in Kisekini Machakos County because his parents were working in Uganda.

According to Mulei life upcountry was a bit tough, but he spent his free time farming.

His passion for the entertainment industry was what pushed him to drop his deejaying headphones and pursue Groove Awards.

Despite its shaky start, the gala event has morphed into the biggest event in the region.

He had a vision of building an event equipment and management company, and over time became one of the biggest and best event firms in East Africa, handling clients such as Safaricom as well as global and regional events.