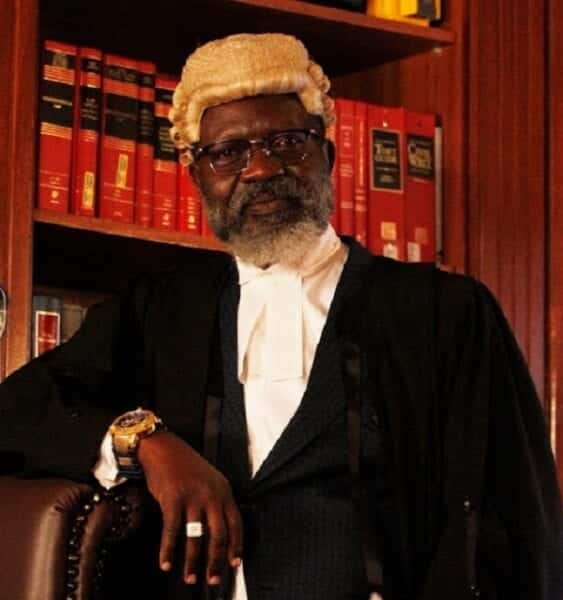 Lawyer George Wajakoya’s passion is to fight for the rights of immigrants and Kenyans in the diaspora. Wajakoya, who is currently studying Immigration Law at the University of Nairobi, says they are the first law firm in the region to offer immigration law.

“The Kenya government, in collaboration with Denmark, came up with this school, Kenya Institute of Immigration Management. We are the second cohorts doing that course,” he says.

The professor says he is very passionate and at one point, he became the best immigration lawyer in the UK, further adding that he has two degrees in immigration.

“I was a refugee, I experienced it, and I decided that this is the only way I can safeguard rights of others like me to take this area of law, but there is no money in this area,” he said.

He says he does not ask for money from his clients seeking for refugee status in the country.

So far, Wajakoya has handled several high-profile asylum cases, including the recent case where he represented Dr Stella Nyanzi, who was seeking refugee status.

He says Nyanzi ran from Uganda to Kenya and his office, asking for help because she knew if she went to the state, she would be returned.

Wajakoya says he can’t disclose where she is now but that she is safe, which is a big step for Kenya in immigration.

Wajakoya has also represented Tanzanian MP Godbless Lema, who ran to Kenya fearing for his life, saying he would be persecuted if deported back home.

Lema, his wife and three children were in Kenya for three months before they flew to Canada after getting asylum.

Wajakoya is also one of the lawyers representing Miguna Miguna in court. Miguna was deported to Canada after allegedly renouncing his Kenyan citizenship, a claim he denied.

Because of the East African community accord, asylum seekers who come to Kenya are repatriated back, Wajakoya says.

“Kenyans who cross to Tanzania are returned back and Kenya also does the same,” he says.

Wajakoya says through his law firm, he has been able to make great strides in the country in terms of asylum cases.

“I have come in to draw a difference, whereby from the recent cases we did, I was able to bring in that area of practice that saw the likes of Lema coming in and being recognised as a refugee in Kenya within one week, and Canada taking him,” he said.

The lawyer says that has led the country to score high on the human rights index, where we are seen as a peaceful place to go as a result of the Lema case.

“Through that, we have been able to cross in 16 MPs from Tanzania quietly to go to Canada,” he says.

He further states, “Wherever Uganda and Tanzania presidents are, they must be worried with the new trends that Kenya is taking on the issue of asylum.”

Wajakoya also represented Congolese musician Koffi Olomide during his much-publicised deportation for allegedly kicking one of his dancers.

He says he has worked in the UK with so many Congolese musicians, including Papa Mapasa.

Regarding Olomide, he was called by a minister in Congo in July 2016 and informed about the singer’s issue, so he rushed to the airport.

“I tried to negotiate the situation as his lawyer, but the authorities snatched the musician from me and put him on a plane to Congo,” he says.

He appealed the decision on behalf of Olomide and last year, the musician was allowed back into country, which was a big win for them.

He says the major challenges they face in immigration law is lack of knowledge because it’s not taught in our law schools.

He appreciates the great strides that have been put in place by the state to try and bridge the gap, but he says more should be done.

Wajakoya says most advocates in the country don’t understand immigration law. Even foreigners don’t know who to go to for consultation on these issues.

“Even our own client, Stella Nyanzi, was misadvised by some lawyers before she reached our office,” he said.

He says those coming home from exile have a duty to contribute to the economy of the country.

“[We should contribute] the knowledge we have from outside, so that we can raise our level of understanding of international economic and justice systems, so that we can be at par with other developed countries,” he says.

Kalonzo jets back into the country for Nyenze’s burial, son’s induction

Is The Word Of God At Work In You?