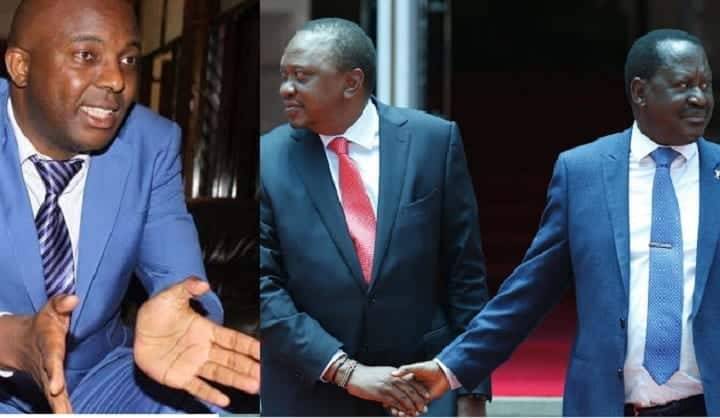 “They said the relationship between Uhuru and Raila was so strong, now look where they are,” he posed.

“The handshake is almost over. I can tell you because I have been in politics for (a) long time. Whenever a small argument or mistrust enters into a political relationship, it can never be repaired. So the handshake is officially over.”

Kang’ata further appeared to blame Raila for the ‘collapse’ of this relationship and also claimed politicians in Central Kenya warned President Kenyatta against working with Raila Odinga but were instead ‘punished’.

“MPs and Senators warned Uhuru Kenyatta not to enter into any political partnership with Raila Odinga. He is not a trust-worthy politician.”

President Kenyatta and Raila public made peace following a turbulent political period leading to and after the 2017 general elections. The two leaders shook hands outside the President’s office at Harambee House in a move that calmed political temperatures in the country. This closing in of ranks however appeared to affect the relationship between the President and his Deputy William Ruto and there has since been a public exchange of words between the two, including a recent suggestion by the Head of State that Ruto should resign instead of criticizing the government from within.

Since the handshake happened in 2018, Uhuru and Raila have been worked together and even championed for a change in the constitution through the Building Bridges Initiative.

But the bromance between the two, who now refer to each other as brothers, took a turn at the weekend when Siaya Senator James Orengo and Suna East MP Junet Mohamed (who are perceived to be close to Raila) publicly lashed out at Interior PS Karanja Kibicho (a Kenyatta ally), accusing him and others for trying to craft a succession plan that potentially excludes them.